Update 4/3/11: I forgot to mention the importance of using fresh pizza dough. I am far too lazy to make my own, but a pre-baked dough (such as Boboli) will just burn on a hot grill. Most grocery stores sell bags of pre-made raw pizza dough, usually kept in a refrigerator somewhere near the bread. This is what I used.
_________________________________________________________________
As predicted, Leo Messi dribbled through defenders. And, as predicted, Argentina saw the majority of possession. Just before halftime midfielder Esteban Cambiasso netted a goal for La Albiceleste. But Coach Bob Bradley's halftime changes made all the difference for the US. 18-year-old Juan Agudelo came off the bench and equalized in the 59th minute. It was his second goal in only his third appearance.


And we can't leave out the always impressive Tim Howard. My fellow New Jersey native put on perhaps his best goalkeeping performance since the last time USA faced Argentina at the Meadowlands in 2008.

My first attempt at pizza on the grill turned out better than expected. I have now learned that there are two important keys to grilling a pizza: 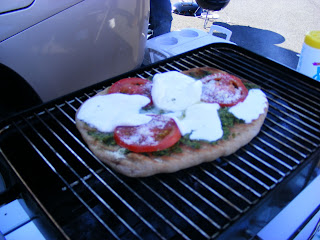 1. Keep an eye on the temperature. In many ways, a grill outdoes a conventional oven in pizza cooking. A properly hot grill means a crispy, but not burned, pizza crust.
2. Grill one side of the dough, flip it, and then top it. What you top it with is totally up to you, and it really doesn't matter. It isn't the topping that makes good grilled pizza. It's the technique and the timing. (If you must know, I made a pseudo-pizza margherita topped with pesto, tomatoes, and mozzarella cheese).


For excellent detailed how-to instructions on grilling a pizza, see the kitchn. 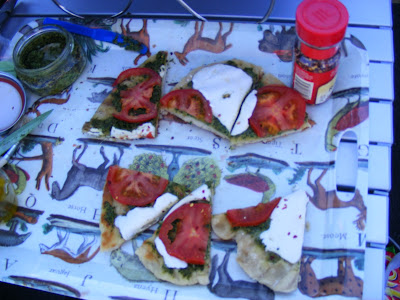 Tune in next week as the Revs take on the Portland Timbers. I'm planning for a(nother) cold, windy day at Gillette Stadium. 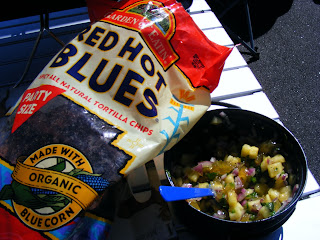