Mocha Icebox Cake, or, The Cream That Wouldn't Whip. 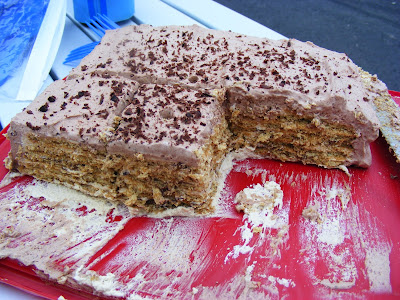 This cake was a near Asphalt Kitchen disaster. It turned out fabulously in the end, but not without some dramatics and a bit of scrambling around Boston.

Chalk it up to my waiting until the eleventh hour to get started. And to my stubborn attempt to get through the recipe without the aid of modern kitchen appliances, such as a mixer...

I was recently gifted a used hand mixer, which I conveniently left at my friends' house because it was too bulky to ride home on my bike with. Lesson about laziness learned! After twenty minutes of furiously whipping cream by hand with a whisk, I threw the first runny (and not remotely whipped) batch out in frustration.

I have whipped cream by hand without difficulty. It's always taken a while, but never before has it seemed impossible. As far as I can tell, I did all things properly this time. I chilled the bowl and whisk. I used very cold heavy cream. I whipped like the dickens. And it never formed peaks. It just looked like this:


So I trekked across the river, got the hand mixer (with whisk attachment), and started again. And it took two minutes to make whipped cream. And it was really easy.

Moral of the story: just use a darn mixer, if you have access to one. 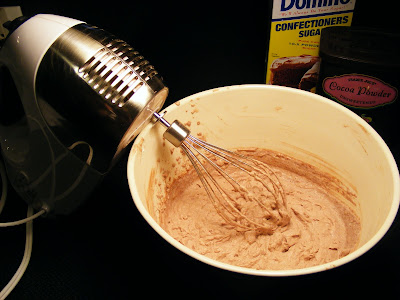 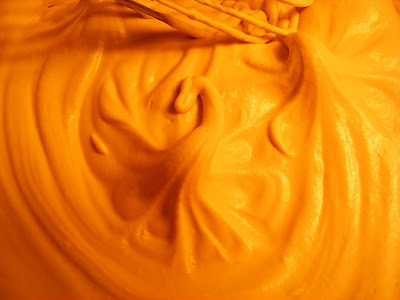 In all seriousness, this cake is the bomb. I am a big fan of icebox cakes in general. I think they remind me of kid desserts, like Dirt Cups or Ghosts in the Graveyard. This one has just the right amount of coffee taste. It is mousselike and delicious, perfect for a birthday cake! 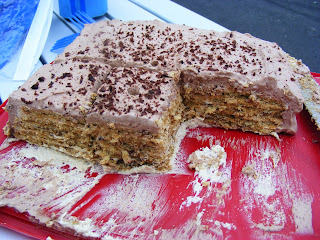 *It's really easy to over-whip your cream and turn it right into whipped butter. Pay close attention to the cream and stop as soon as you like the consistency. 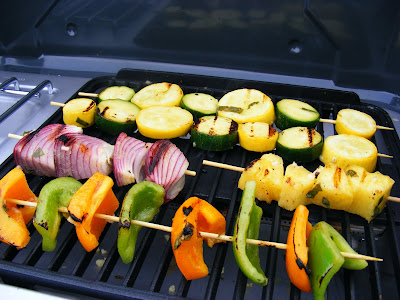 My attention this week was focused on making a (very rich and filling) birthday cake for Chris, so I went into this tailgate intending to keep things simple. When it comes to vegetarian grilling, there are few meals simpler than kabobs. Well, maybe frozen veggie burgers, but I'm trying to avoid those until I'm desperately scrambling on the day of some unbearably hot home game. Oh, to imagine the possibility of a hot day at Gillette...

Instead we got more chilly rain.

Bean's keys to the game (of grilling good vegetable kabobs):
Number one is self explanatory. Don't buy crummy looking vegetables. Choose whatever veggies you like. And some fruits, too. Fruits are great on kabobs. Buy what's in season, if you can. This was not an option for me... unless I could manage to make make asparagus, radish, rhubarb and lettuce kabobs. I used zucchini and summer squash (I know, not in season!), peppers, red onion and pineapple (not even remotely local, but it tastes so good on the grill). 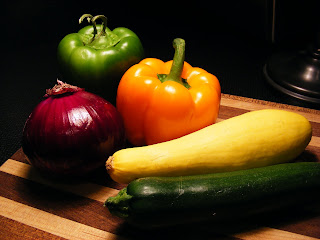 Number two is easier than you'd think. Truthfully, the marinade I made was nothing special. I'm not saying it wasn't tasty. It was just a run-of-the-mill garlicky-lemony-dijony mixture I made a night before the game and refrigerated. You can probably make a marinade right now from ingredients you have on hand in your kitchen. As long as you blend an acid (such as vinegar or lemon juice) with oil, salt, and seasonings, you'll have a marinade. You can substitute any herbs, mustards, oils, and spices you like to shape your flavor (case and point: Steph's Thai Peanut Marinade). I tossed together a quick mixture based loosely on this this Food Network recipe. I upped the oil, downplayed the lemon, and more than doubled the garlic and herbs called for in the original recipe. In haste, I also accidentally spilled a fistful of whole black peppercorns into the mixture. My apologies to Joe Butler, who bit into one of these rogue peppercorns... 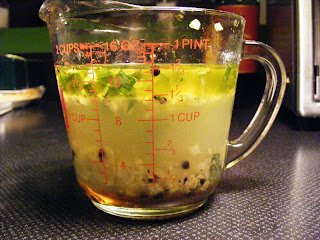 Number three is essential. Like me, you are probably accustomed to arranging colorful vegetable chunks of all different sizes vertically on a skewer. Don't do that! If you want your veggies to cook evenly, cut them into thick, even slices and thread them onto the skewers so the cut sides lie flat on the grate. This will help them to cook evenly. Knowing that some types of veggies cook faster than others, I even arranged the skewers so each had only one type of vegetable. Oh yeah, and don't forget to soak your skewers in water before using them! Otherwise you'll enjoy putting out a few skewer fires. 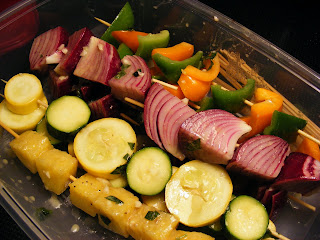 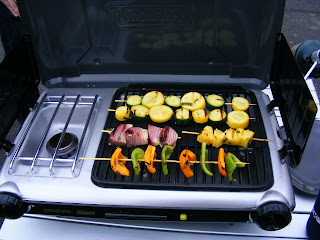 Preparation
1. whisk together all ingredients in a small bowl.
2. cover and refrigerate
3. About 2 hours* before grilling, place chopped vegetables in a large ziplock bag and pour marinade over them. Seal bag and shake gently to evenly coat.

*Word to the wise: You want your veggies to absorb the flavor of the marinade, so give them at least 45 minutes to marinate. BUT, don't leave them too long. After 2 hours, the veggies may start to break down and become mushy.
Posted by Bean at 10:39 AM 2 comments: 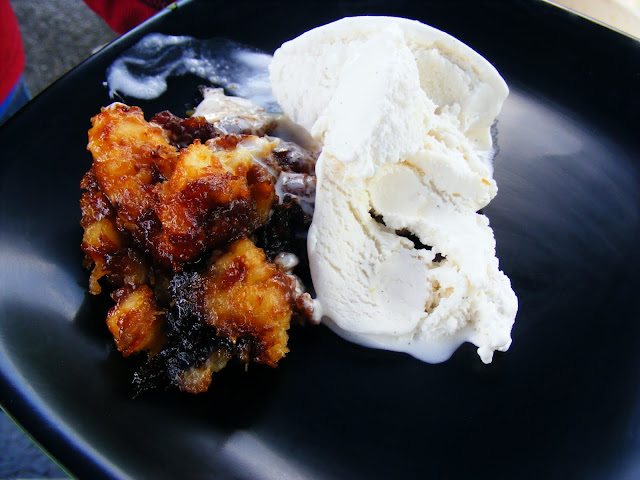 I can't lie. There is no true recipe to this dessert. I've made many versions of fried, caramelized, or otherwise fattened bananas. For some reason my brain wants me to use different ingredients and a different cooking approach each time I make the dish. I've also never once measured the ingredients. Not that this is a bad thing. Experimentation has taught me much of what I know about cooking. (It has also brought on its fair share of kitchen disasters.)

Usually when I get an idea, I just can't seem to let it go. This Saturday I was dead set on keeping ice cream frozen in the trunk of our car for two and a half hours. I don't know whether I wanted ice cream that badly or if I just wanted to prove a point, but somehow it worked. Nestled among cold beer and packed on ice in a hot/cold bag, my vanilla ice cream managed to stay just the right amount of frozen through a car ride from Cambridge to Foxboro and on into an hour of tailgating. 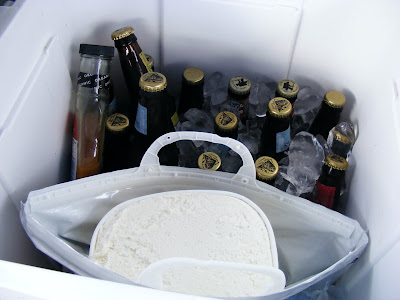 I think it was the ice cream dream that inspired the caramelized bananas, but it didn't hurt my cause that we had a brand new grill equipped with side burner. Which I was dying to test out.

And test out I did. In a tiny camp saucepan, no less! 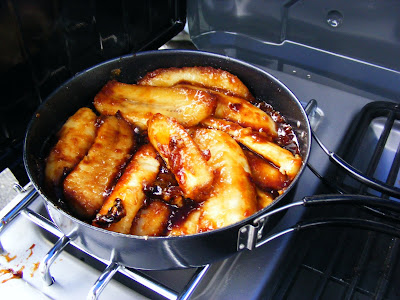 Due to the proximity of this saucepan to both a can of propane and several idling vehicles, I opted to forgo the traditional flambe procedure (and with it, the rum). Hence the "ish" in the recipe's title...

Preparation
1. Melt butter in saucepan or deep skillet over hot grill surface or burner.
2. Stir sugars vanilla and cinnamon in to saucepan
3. When mixture begins to bubble, add bananas and cook, tossing gently, until hot and lightly browned.
4. Serve immediately with a scoop of vanilla ice cream

You can add rum, caramel, chopped walnuts, or anything your heart desires to this dish to make it extra special.
Posted by Bean at 3:34 PM 1 comment: 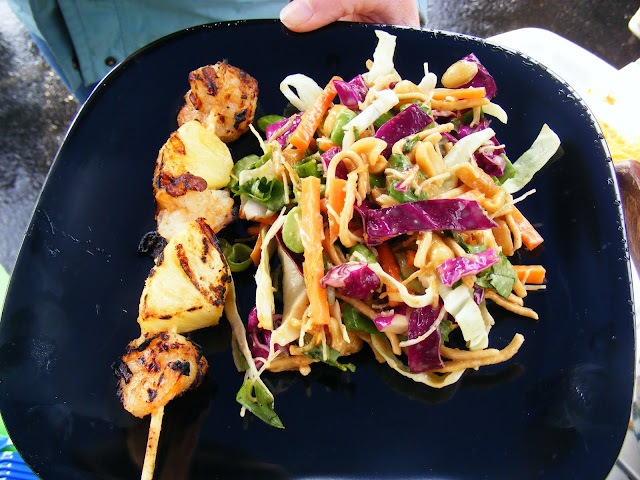 This weekend, our tailgate festivities were once again threatened by the elements. Thanks to all the folks who helped protect us from the rainstorm! Especially Julie, who, as per usual, came better prepared than I did (with a tent).

Fortunately, the clouds parted long enough to permit our first go-round with the Coleman grill stove I bought for Chris's birthday. Well, actually, Steph tested out the grill with some delicious shrimp and pineapple skewers. I used only the burner to cook camp-style Bananas Foster in a small saucepan. More on that next post... 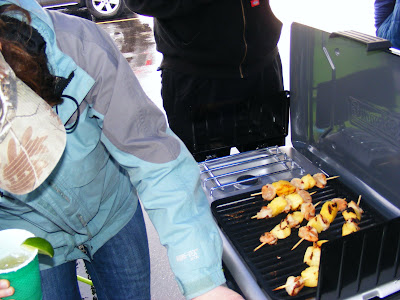 Our new grill stove was great addition to the tailgate. It's quite small, so it wouldn't be useful for a large group, but it suits our needs perfectly. The grill surface heated up quickly and, surprisingly, is dishwasher safe. You may have noticed that I like to cook a lot of  not-exactly-grillable foods at tailgates, so the added single burner is a bonus. I look forward to making soup and heating up mulled apple cider in the fall!

I'm starting to feel unsure whether this was a gift for Chris or a gift for myself...

Steph brought a lot to the table tonight. In addition to her charm, good looks and yummy skewers, she concocted some delightfully potent Beeritas to inspire a little all-American caricature of a Mexican holiday. 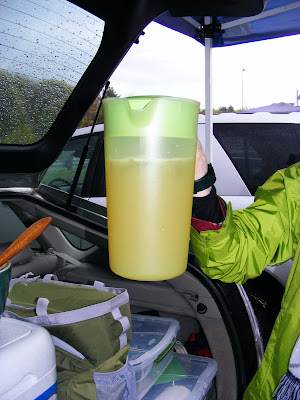 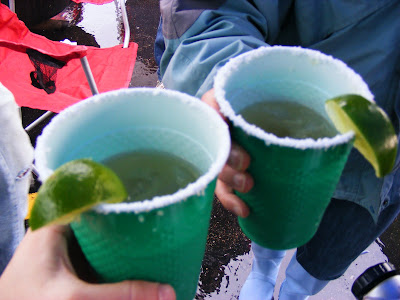 Tonight's Thai Crunch Salad recipe was inspired by Chris's mom, who made a version of the dish at Easter lunch this year. And I believe her dish was inspired by California Pizza Kitchen's salad of the same name. I will warn you, this is not a diet salad. It is borderline habit-forming. I think it's the combination of sweet-nutty-crunchy and slightly spicy that really hits the spot. I do believe my attempt at this salad is at least somewhat less indulgent than the CPK version--a half order at the restaurant appears to have a whopping 39.5 grams of fat. But, truthfully, a salad filled with peanuts is bound to be fatty. Also delicious. 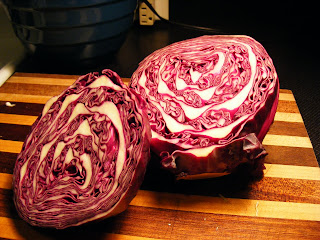 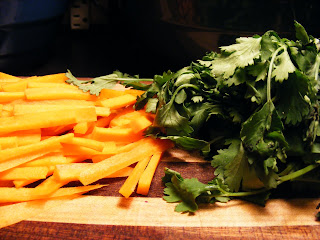 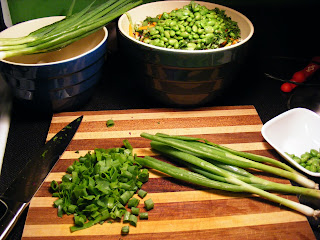 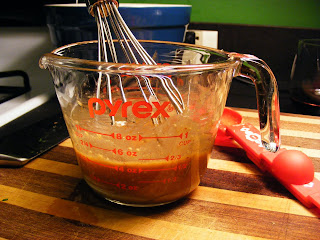 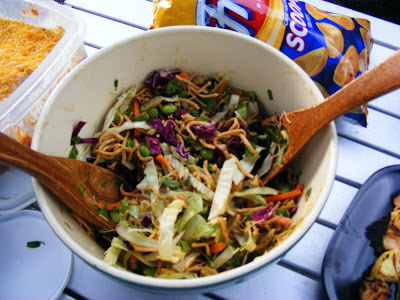 This recipe made WAY more salad than I was expecting it to. So big that I had to use a stockpot to toss the ingredients because they wouldn't fit into my largest mixing bowl. Seriously. If you're following this recipe and plan to save some of the salad for leftovers, I'd advise leaving off the peanuts, chow mein noodles, and dressings until you are ready to serve. I actually only brought half of the salad and toppings to the tailgate, and it still fed 8 of us (as a side dish).