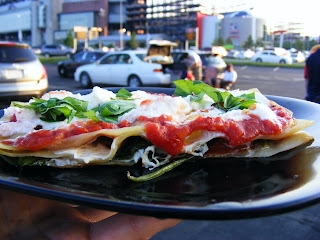 In the span of one week, three friends independently e-mailed me the same Food Network recipe for lasagna on the grill. I've never received specific tailgating requests or recommendations (aside from Joe requesting Mocha Icebox Cake for every home Revs game). So, in the spirit of listening when folks advise me to do something, I tried it.

And you know what? It turned out to be, hands down, the best meal I've made on the grill all year.

I'll admit I was skeptical about the practicality of making lasagna on the grill. In the oven lasagna can take upwards of an hour to cook. Although there is significant prep work in chopping, mixing, and assembling the lasagna for this recipe, the method of cooking is actually fairly straightforward. Essentially, you steam individual-sized lasagnas in packets of foil using a small amount of water. No-boil lasagna noodles, while strange in concept, are really convenient here. 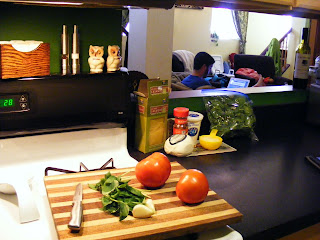 I attribute the success of this lasagna to using very fresh produce (thanks to Farmer Dave's). Because the filling has only a handful of ingredients, flavorful tomatoes and basil truly made the dish. 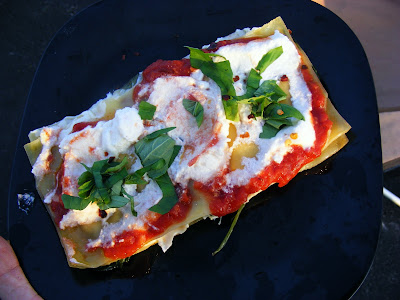 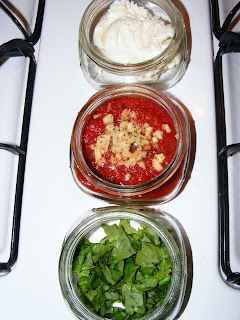 Preparation
1. At home: Combine mozzarella, parmesan, red pepper flakes, 1/2 teaspoon salt, 2/3 of the garlic in a bowl; drizzle with olive oil and toss. In a separate container, season the sliced tomatoes with salt and pepper. In a third bowl, mix the crushed tomatoes, remaining garlic, a pinch of salt, and tablespoon of olive oil in a bowl.
2. At the game: Preheat grill to medium. Lay out four double-layer sheets of foil. Drizzle each with olive oil, top with one noodle and sprinkle each noodle with a tablespoon of water. Layer some spinach, sliced tomatoes, and mozzarella mixture among the noodles. Repeat with another layer of noodle, water, spinach, tomatoes, and mozzarella mixture. Top each stack off with a third noodle, one tablespoon of water and a drizzle of olive oil. Close the foil and crimp edges tightly to make flat packets.

3. Grill the packets, covered, about 10 minutes per side. Let rest five minutes. Open the packets and cut the lasagna in half (if you intend to share. Or leave it and eat the whole damn thing yourself, as I did.) Top with the crushed tomato mixture, ricotta, and basil. 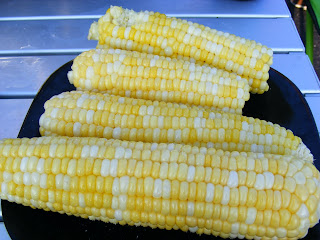