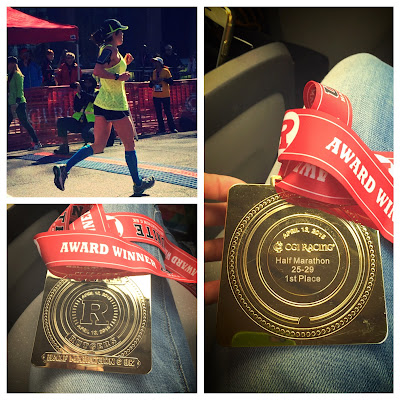 I signed up to run the Rutgers UNITE 2015 Half Marathon on April 12 to kill two birds with one stone: Visit my family in New Jersey and run a tune-up race to test out race preparation, gear, pacing, and fueling strategies for my quickly approaching first marathon in May.

On the bus ride from Boston to NJ, I wrote down the following goals:
Before I re-hash my own race day experience, I must talk about... 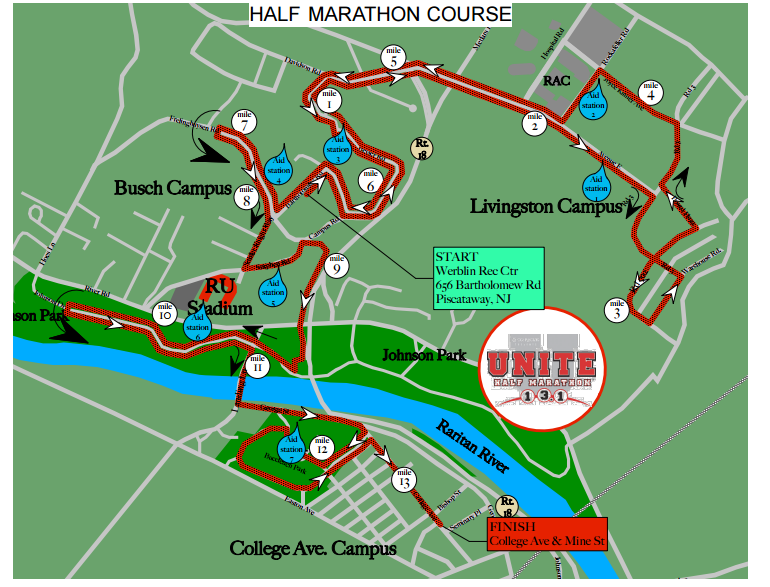 This is how the official race website describes the half marathon course:
"This course is 13.1 miles of collegiate beauty that will take your breath away. Rutgers University is one of the oldest, largest and most beautiful campuses in the country. The UNITE Half Marathon at Rutgers does indeed UNITE runners of all abilities from elite to novice.

The point to point route passes by the recently renovated Rutgers Stadium, historic College Ave Gym and finishes down College Avenue to thousands of fans!"

Now, I love Rutgers University. New Jersey is my home. My grandmother and sister are both proud Rutgers alums. It's a fantastic university. But, let's not kid ourselves here. The only thing about Rutgers that will take your breath away is the smell of the Raritan River. The course was flat and fast and I enjoyed seeing places on campus I remembered visiting. I suppose it was sort of point to point, in that it started in one place and ended in another...but it looped around, crossed itself, and had no fewer than 4 hairpin turns. Yes, it did finish down College Avenue. In front of maybe a couple hundred fans and one group of frat bros playing Cornhole.

Don't let my cynicism deter you from signing up for this race! The dinginess and Eu De Pork Roll are part of Rutgers' charm! I merely wish to share my bemusement about the liberally scenic description of New Brunswick, NJ.

All right, on to the recap!

PRE-RACE
I snapped awake in my step sister's twin bed to the sound of my alarm at 5:15. Being unabashedly Type-A, I had laid out all of my clothing and gear the night before (with my bib already pinned to my shirt and my race fuel packed in tiny Ziploc bags). I got dressed in under a minute. 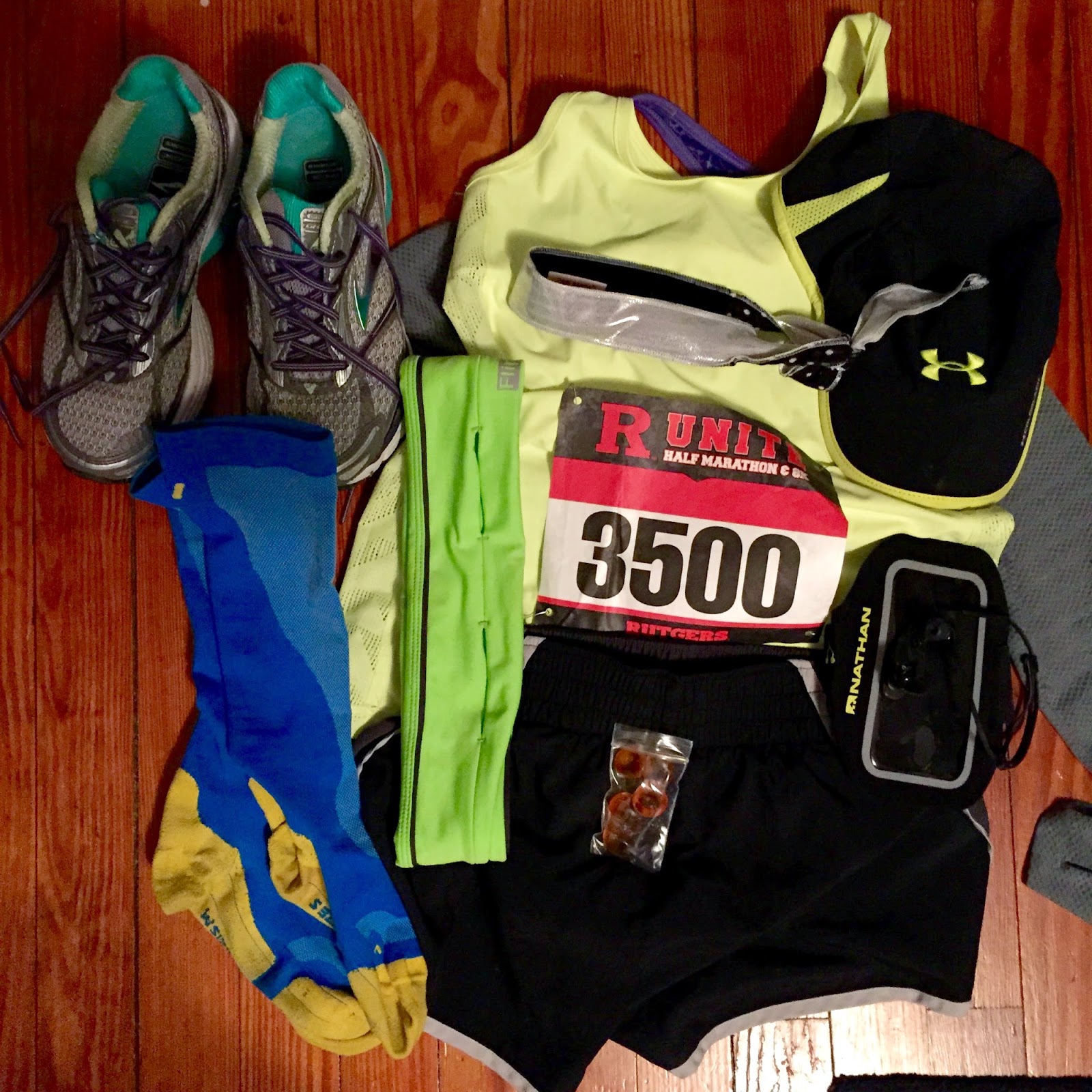 I crept downstairs, trying not to wake my dad's puppy, and prepared my tried-and-true pre-race sprouted grain english muffin with almond butter and banana. I felt surprisingly hungry and washed breakfast down quickly with a big glass of water. I crawled back into bed with my alarm set for 6:30, but got up at least three times before the alarm went off to use the bathroom. Three cheers for pre-race nerves! I attempted to calm said nerves by listening to some relaxation music on my headphones while staring at the ceiling.

At 7:10, with my backpack jam-packed for the inevitable end-of-day bus ride back to Boston, my sister and I pulled out of the driveway to make the 30-minute drive to Rutgers University and the start line at Busch campus. Have I mentioned how much I love my sister? She hauled my hobo butt around all weekend long and stood around waiting to cheer me on at the race. She's pretty great.

RACE START
At 7:45, my sister dropped me off as close as she could to the race start at Werblin Rec Center on Rutgers Busch Campus. She planned to drive over to park near the finish area at College Ave. I jogged my way to the port-a-potties, but quickly calculated that it was not worth risking a late start to wait in the massive queue.

The starting chute had pace leaders holding signs for each predicted pace group from 8 minutes/mile to 11 minutes/mile, but there were no official corrals and 3000 runners were sardined between metal gates lining the chute, so it was impossible to push my way forward without being a big jerk. I lined up next to the 11 minute sign, accepted the fact that it would take me several minutes to cross the start line and prepared myself for a first mile of bobbing and weaving through runners. I squished my new Jaybird wireless headphones into my ears and set my Garmin while the race announcer readied us over the loudspeaker. Conditions were nearly ideal for a race: Sunny, temps in the low 50s, no wind, flat course.

MILES 1-3
Bob and weave, I did. The gun went off at about 8:10, and I crossed the Start line a few minutes later. The lateral exercises I've been incorporating in my training came in handy as I side stepped around runners and burst forward through any seam I could find. We ran over potholey roads in an area my sister referred to as "The Livingston Warehouses". I focused on creating myself space in Mile 1 and then settling in to a conservative, but challenging pace in Miles 2 & 3. The miles were well marked with large flags, but there were no clocks. This was just as well, since I was attempting to pace this race by feel instead of by clock. Fewer distractions to obsess over.

MILES 4-6
Just after the Mile 4 marker, the course looped on itself in the opposite direction, so we could see runners starting in on their mile 2. Between miles 4 & 5 I passed a little girl holding up a poster board sign with a big star in the middle and the magic-markered words "Press Here for Power!" Little girl, you are awesome. And you gave me some serious power! I managed to avoid looking at my watch for this stretch.

MILES 7-10
After passing the Mile 6 marker we crossed back over the start line, running in the opposite direction past the rec center, before turning down a driveway and making our first hairpin turn around Mile 7. More than halfway! I pulled out the carefully packed fuel from my shorts pocket and promptly fumbled the homemade, delicious date puree packet to the pavement. No time for stops. Fortunately, I did not drop the Honey Stinger chews I'd packed as backup and I chomped a few of these down as I carried on. I spotted my dad on the side of the road between Miles 8 & 9 and gave him a toothy grin and a wave. Feeling pretty great here, I finally allowed myself look down at my watch. It occurred to me I might actually be lining up a PR. We crossed a "scenic" highway overpass. Mile 10 was spent on a bike path in Johnson park that had two hairpin turnarounds. 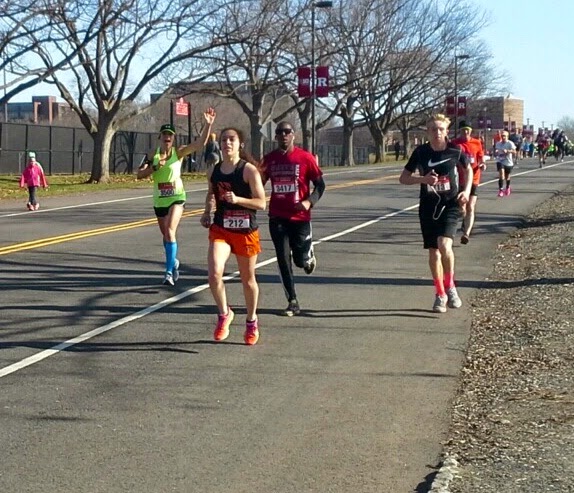 MILES 11-13.1
Somewhere around Mile 11, we crossed over the beautiful Raritan River before running a circle around a gazebo in Buchlech park. Still feeling surprisingly comfortable, I decided to let it fly and smiled smugly to myself as I passed two women I'd been trailing for the last three miles. I don't feel the least big guilty for being smug. It's a race, dammit! Once we exited the park, I knew I had less than a half mile to go. There was a small hill that felt big up College Ave, and then an all out downhill sprint to the finish line, where I grinned at my dad and sister. 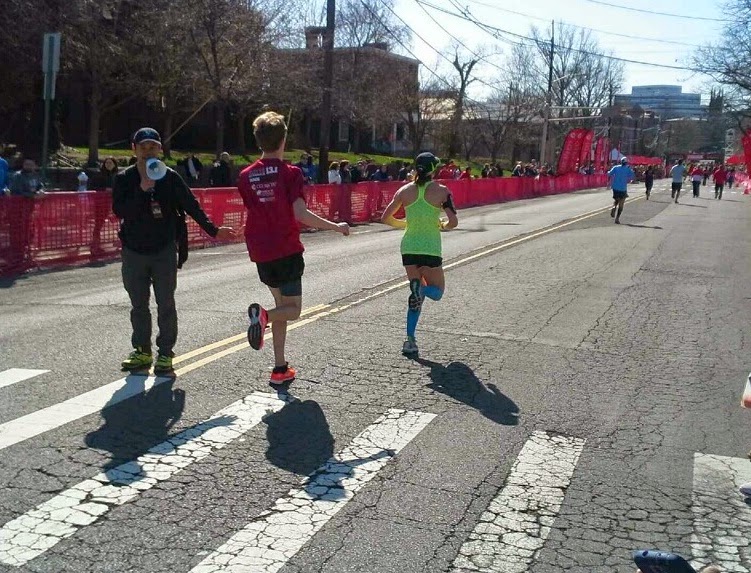 RESULTS
Apparently, the "conservative" and "run by feeling" approaches suit me. I ran a PR of 1:34:50, finishing 8th overall for women and 1st in my age division. Conditions were nearly perfect for racing. By not being fixated on clocks and watches and splits, I was able to push the pace and stay relaxed at the same time. Huge confidence boost going into my last 6 weeks of marathon training! 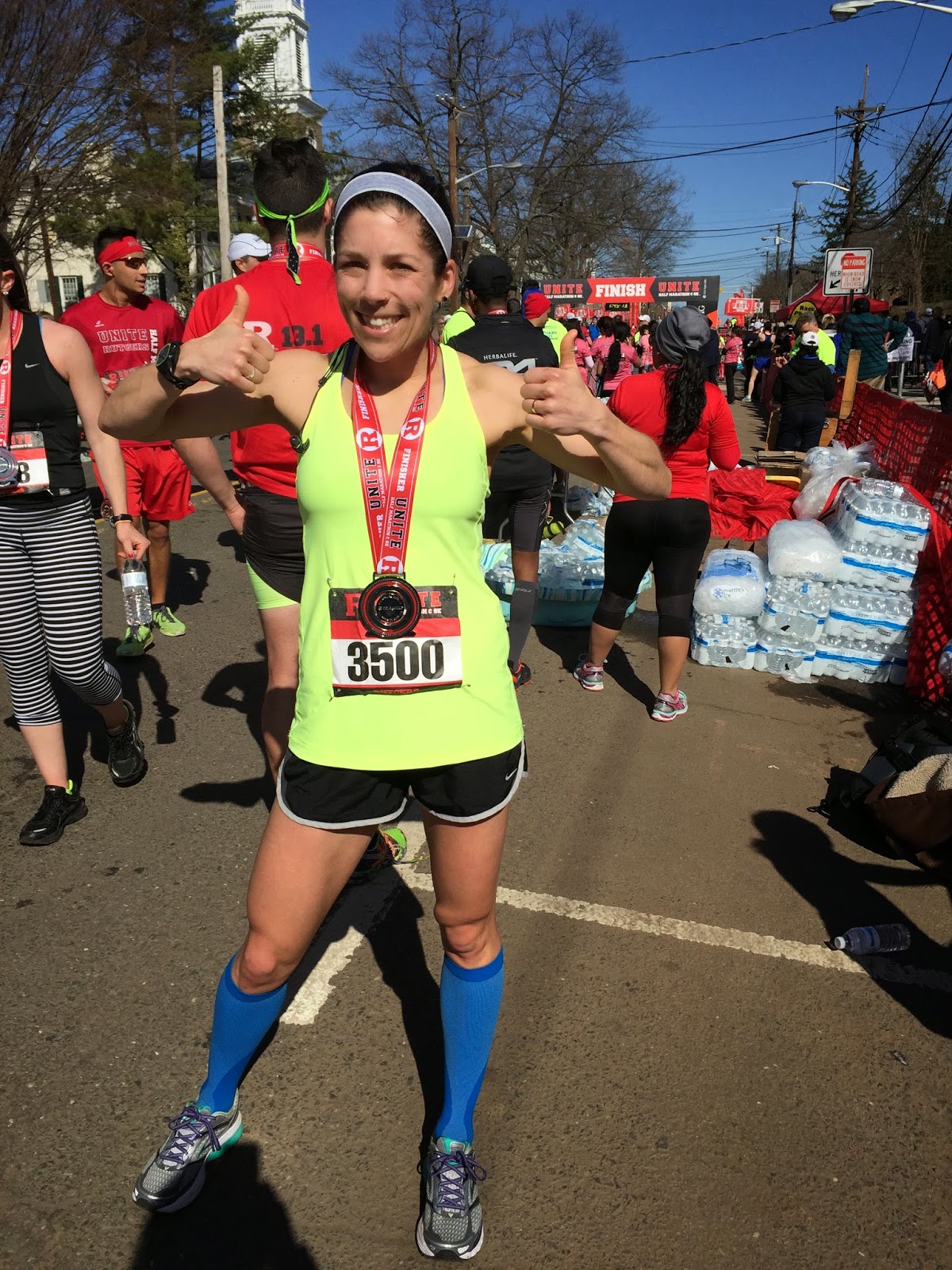 Running a half marathon totally solo was a novel experience for me. I am so grateful to my dad and sister, who came out in the early morning to cheer me on! 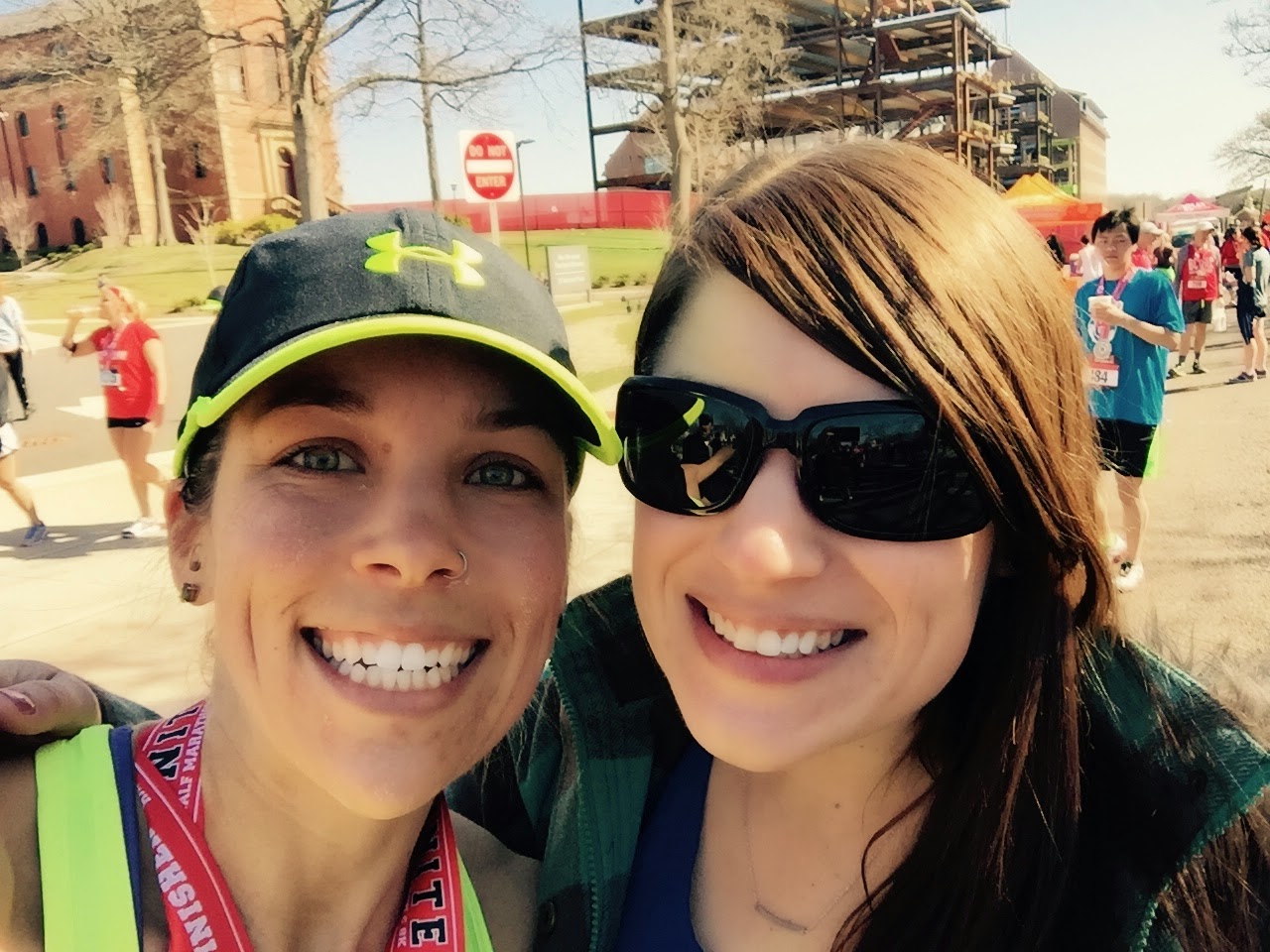 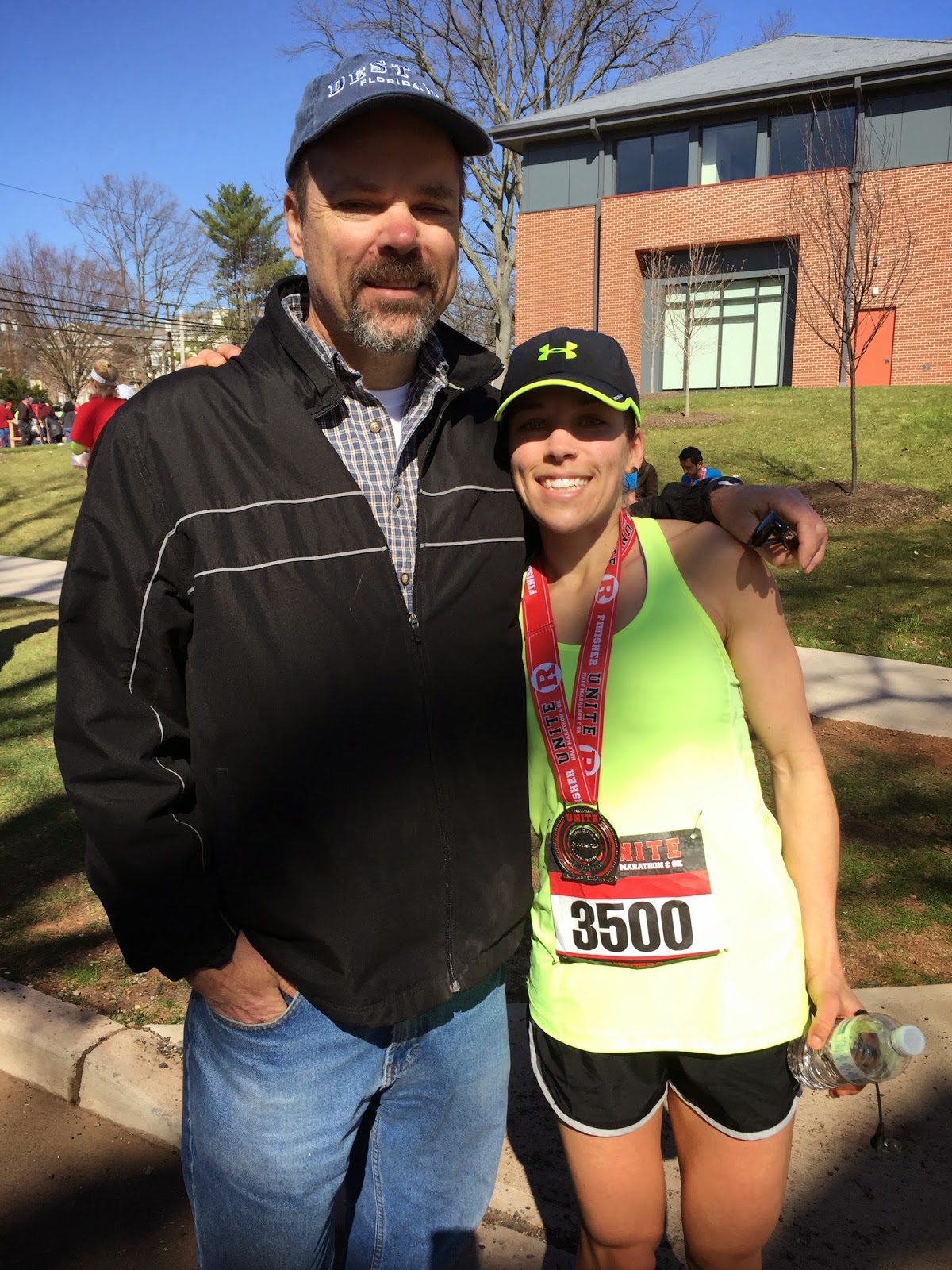 I did find myself wondering about the weird post-race food bag I was handed at the athlete tent... 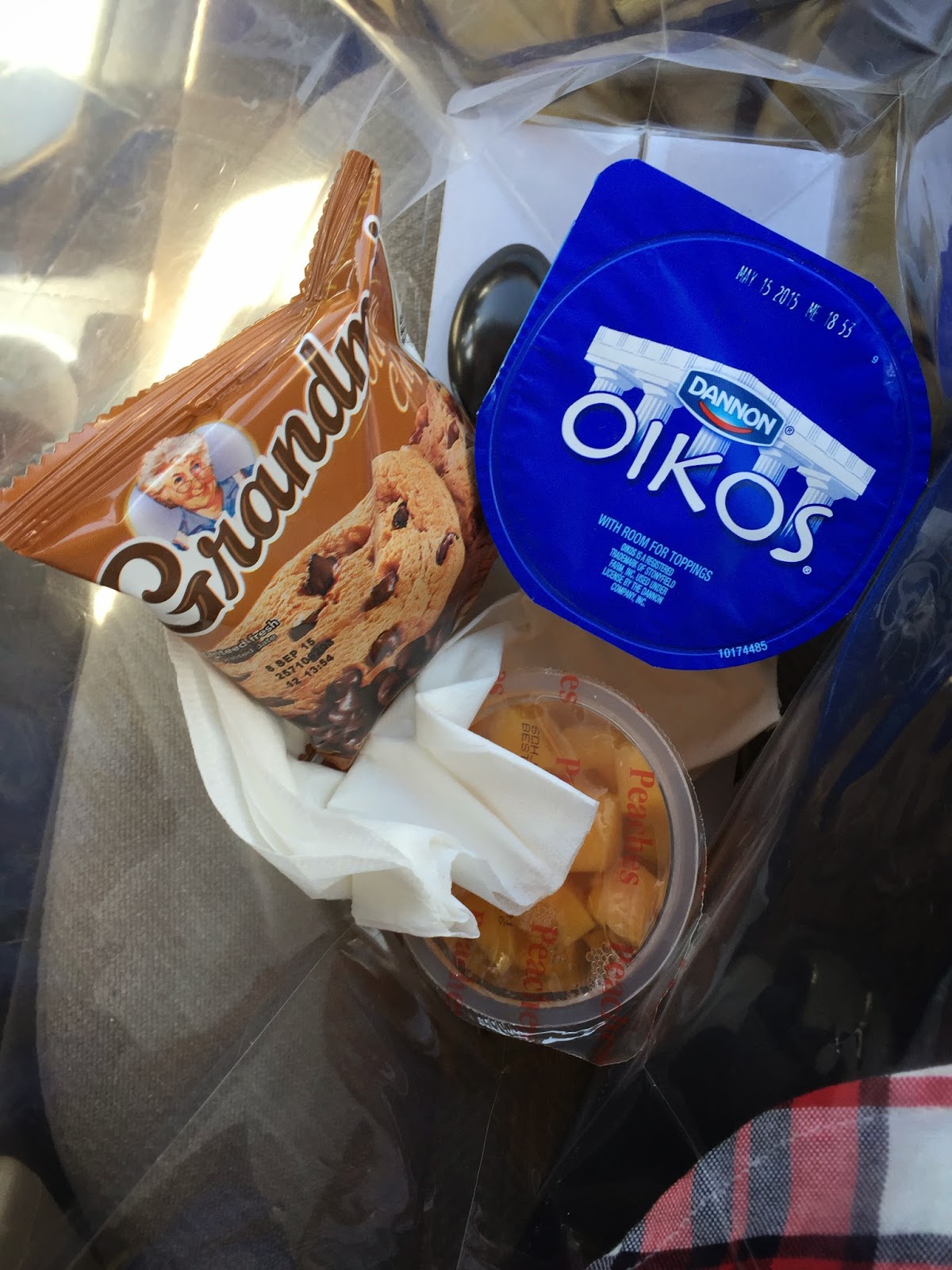 Who wants to stand around eating canned peaches in syrup and warmish yogurt with a spoon at the finish line of a half marathon? What's wrong with a banana?

I know that sounds awfully whiny, so I'll counter it by saying I dug the hefty and impressive finisher medal and am always thrilled to add a mug to my collection. 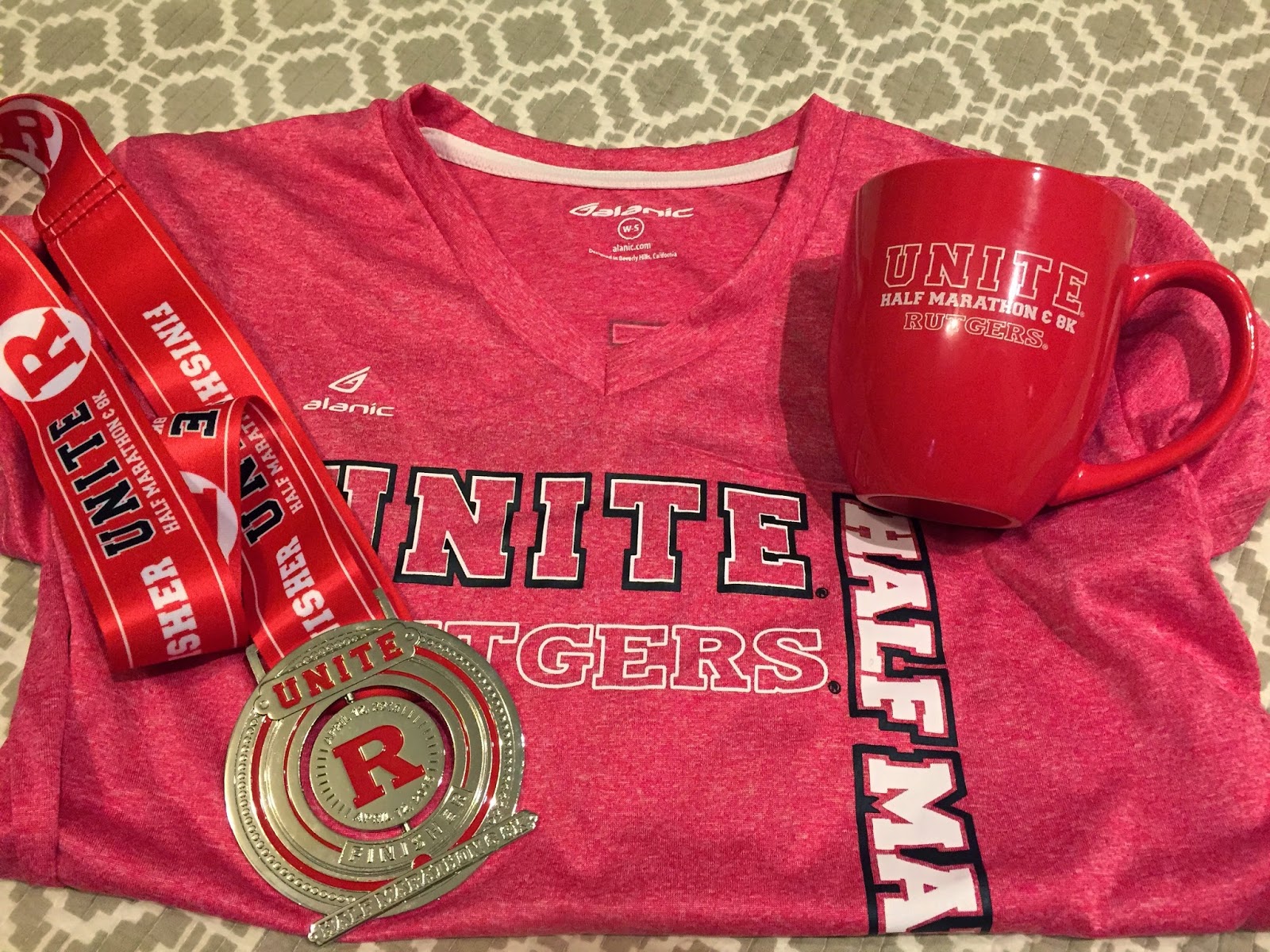 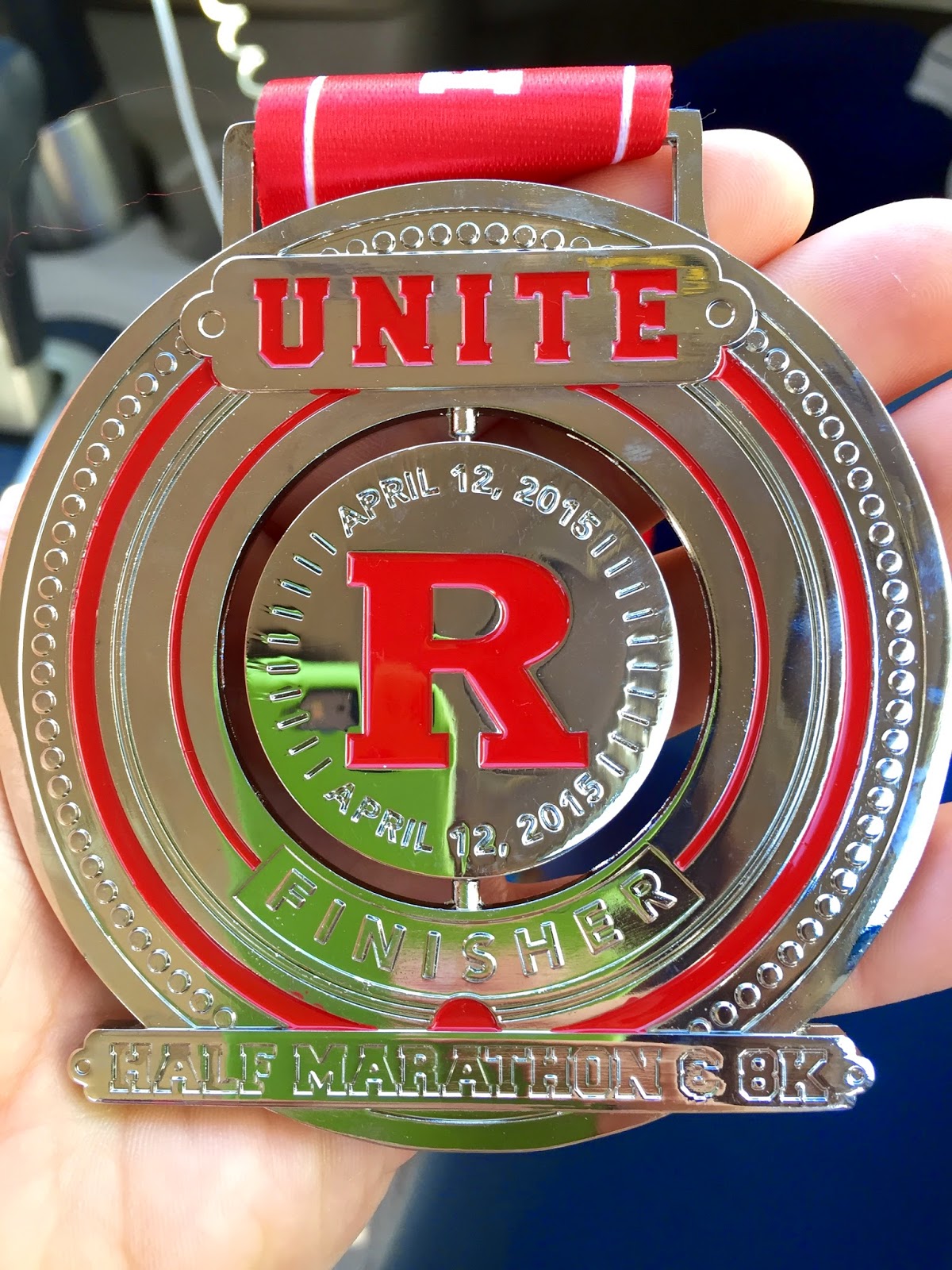 After the race, the kind folks at the front desk of the College Ave Gym were kind enough to let me dodge into the locker room for a quick shower. I'm sure the guy next to me on the 4 1/2 hour bus ride back to Boston appreciated this! I will admit that a 4 1/2 hour bus ride after a half marathon probably wasn't the most advisable decision. But, hey, had to get home somehow.

It was a good day.

And, extra bonus - I didn't realize I'd won my age group until I received a surprise package two weeks after the race. A huge age group winner medal! 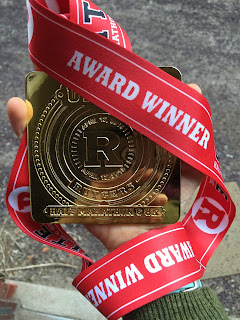 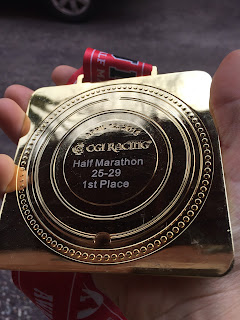