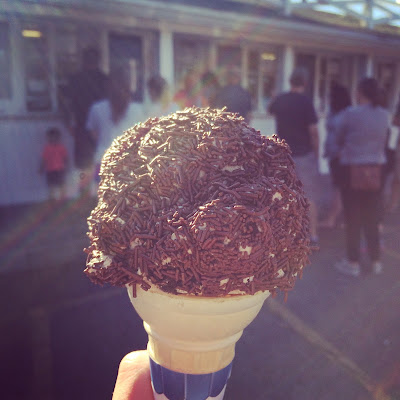 I did not intentionally set out on a quest to eat my body weight in frozen dairy products this summer. No. My path to this noteworthy accomplishment unfolded organically. Between Memorial Day weekend and Labor Day weekend, I ate ice cream or frozen yogurt at 26 different shops.

You read that correctly. I did not write that I had 26 ice cream cones. I wrote that I ate at 26 different shops. Many were visited more than once, and for more than one scoop of ice cream. I really like ice cream.

Credit to my husband for suggesting the idea for this post. The inspiration came as he watched in amusement while I furiously licked a cone of salted caramel in a feeble attempt to stay ahead of it dripping down my arm in the sultry parking lot of Crescent Ridge Dairy in Sharon, MA.

I'd like to believe that my vast frozen dairy eating experience entitles me to claim expertise when it comes to scoop shops. And so, I give you my unsolicited New England Ice Cream (and Frozen Yogurt) Shop top ten list. Things to bear in mind:

10. GoBerry (Northampton, MA)
Not technically ice cream, GoBerry is among the trend of tart soft serve frozen yogurt shops that have filled empty storefronts formerly occupied by cupcakeries. Though I know the FroYo thing is a trend and often a gimmick, this sweet shop in Northampton, MA quickly won me over. In August, they sponsored the Frozen Yogurt 5K race to benefit Gandara Center. Not only did they offer FREE frozen yogurt to all race participants, but they opened up at 9:30 am and served all of us with a warm smile. I got the original tart frozen yogurt, and it was really, really tasty.

9. J.P. Licks (Boston, MA)
I received a tip from fellow ice cream connoisseur, Steph, that Boston-based chain J.P. Licks is scooping coffee cookies 'n' cream hard frozen yogurt among their September flavors of the month. Typically, I avoid J.P. Licks because it's pricey compared to other local ice cream shops. But take my very favorite flavor and turn it into frozen yogurt? After a long walk in downtown Boston, I just had to taste this flavor at the scoop shop in Beacon Hill. I coerced my visiting sister into getting a cone, too. I've since been back to both the Harvard Square and Davis Square locations for follow-up coffee cookies 'n' cream. September will end soon! I HAVE TO EAT IT ALL! 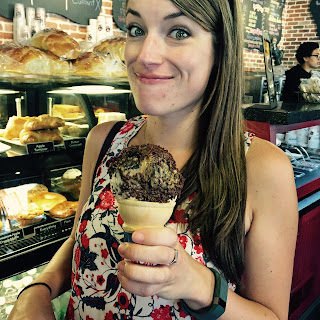 8. Frozen Yogurt on the Half Shell (Harwichport, MA)
Another FroYo place?! I thought this post was about ice cream. To be honest, I remember very little about the frozen yogurt itself from this shop. It made the list simply because of what we stumbled upon when we arrived. I felt compelled to meet my daily frozen dairy quota on vacation in the Cape, but was feeling rather full after a generous dinner. So I begged Chris to take me here upon reading on Yelp that they had self-serve frozen yogurt. I am a sucker for a place where I can mash together multiple flavors and decorate with my own odd toppings. Imagine my delight when we discovered that a Free Musical Stroll was going on in town... 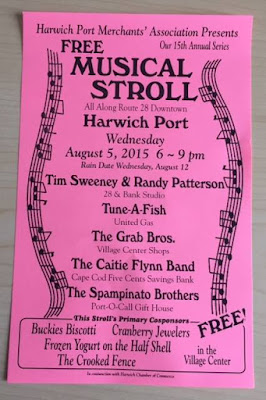 ...and that, as part of said Free Musical Stroll, a band called the The Grab Brothers was playing a Jethro Tull cover, complete with epic flute solo, immediately next door to the frozen yogurt.

7. Sundae School (Dennisport, MA)
If you've peeked ahead in this post, you know that Sundae School made it onto my list twice. I visited two different locations while vacationing on Cape Cod this August, and both experiences were worthy of a ranking. Sundae School is a beloved institution among Cape-goers. It's a family-owned, homemade ice cream purveyor with three quaint locations and it's been around since 1976. Having already visited the Harwichport Sundae School twice, Chris and I found ourselves in Dennisport at the original Sundae School location thanks to a GPS goof. After a string of humid, slow, nauseated, demoralizing runs for a few weeks mid-summer, I'd finally had one of those I'm-flying-and-I'm-invincible long runs along the ocean that morning. The appetite I worked up undoubtedly contributed to my love for this place. As I approached the counter, I saw the words "PIRATE PANDEMONIUM" chalked on the specials board. I didn't even ask what the flavor was before ordering. It was peanut butter ice cream with a fudge strip and chocolate covered pretzels. YES, PLEASE. 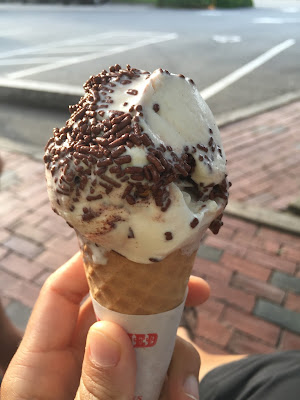 6. Christina's  (Inman Square, Cambridge, MA)
Christina's is my neighborhood ice cream joint in Inman Square, and I would be remiss to leave it off the list. Of all scoop shops, I visit this one the most. Because it's three blocks from my house. Christina's boasts very reasonable prices and unique, homemade flavors. The line is out the door all summer long. Try their coconut Butterfinger. It sounds odd, but it's fantastic! I'm also a huge fan of coffee Oreo (always) and will soon make the switch to ginger molasses to begrudgingly welcome fall.

5. Ben & Jerry's (Newport Folk Festival, Newport, RI)
Ben & Jerry's was tucked among Food Trucks near the corner of the famous Fort Stage at the Newport Folk Festival. Behind their small, unassuming cart, patient employees hand-rolled waffle cones to order. I know you can buy a pint of Ben & Jerry's ice cream in any old 7-11 these days, and I even visited the Ben & Jerry's factory this summer, but there was something extra magical about eating a cone and watching the sun drop over the Pell Bridge as Sufjan Stevens vulnerably serenaded me with Chigaco. Plus, they had "scoop shop only" flavors, like salted caramel blondie.

4. Buffy's (Chatham, MA)
Buffy's was one of five ice cream shops we visited while on Cape Cod. Of the five shops, Buffy's boasted the best quality ice cream. They serve creamy, rich New England style ice cream made on premises in really delicious flavors like coconut Oreo and chocolate chocolate chunk. Their portions are enormous, and my only complaint about the whole experience is that my server couldn't seem to understand my request, "I'll pay the full price, just put LESS ice cream on the cone, please." Chris loved the pink sprinkles. 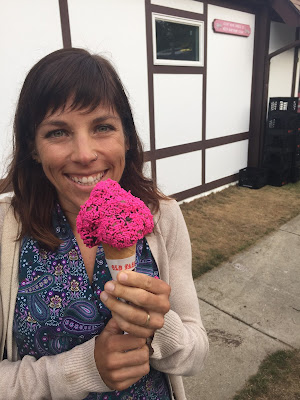 3. Herrell's (Northampton, MA)
The dense and creamy and incredible scoop of cookie dough peanut butter swirl I ate at Herrell's was, hands down, the best cone of ice cream I had all summer. Steve Herrell is regarded as the pioneer of small batch, super rich, creamy, low-air ice cream New England is famous for. His original scoop shop, Steve's, was located in Somerville, MA. All of Herrell's ice cream is made on premises and the line is constantly out the door. I needn't say much, because the ice cream at this unassuming shop speaks for itself.


2. Burlington Bay (Burlington, VT)
Burlington, VT has Ben & Jerry's and it has creemees. A "creemee" is what Vermonters call a soft serve ice cream cone. I can't objectively say that the chocolate-vanilla twist creemee I ate at Burlington Bay Cafe was notably superior to other soft serve ice cream out there. My memory of this cone is perhaps tinted by the fact that I ate it after running 26.2 miles for the first time in my life. In that moment, it was the most satisfying treat I could possibly imagine, and I loved everything about the experience and the people I was with. It seems I may have developed a recurring theme of, "It was amazing because I ate it after running." If you do check out Burlington Bay, I've heard the maple creemee is where it's at. (I have a thing for sprinkles, eh?) 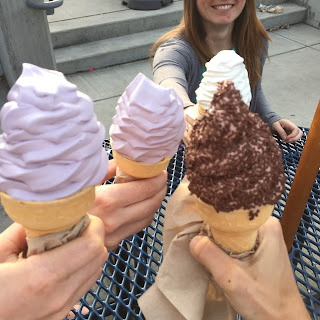 1. Sundae School (Harwichport, MA)
I fell for Sundae School in Harwichport the moment we pulled into the parking lot. It was bustling with families who all seemed to be having the best day ever. Despite there being a constant, massive line of ravenous vacationers, the smiling teenage staff worked like a well-oiled machine, rapid-fire scooping and ringing out orders. I was smitten with my coffee heath bar ice cream cone and equally won over by the mother who saved the day by retrieving a fallen ice cream scoop off the ground with her hand and placing it right back on top of her her teary-eyed, ice cream-covered son's empty cone. The paper hats put this place over the top. 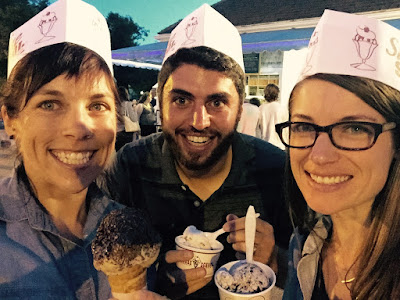 Summer's not officially over yet, and I've been told I should go "30 for 30" to honor my recent birthday. An upcoming trip home to NJ will most certainly add a few more cones to the list. What scoop shops have I missed? Any recommendations in the greater Boston area?
Posted by Bean at 8:37 PM