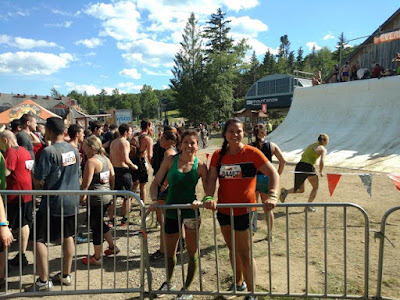 Before I begin my tale, I must acknowledge the mislabeling of this post. Tough Mudder is not a race. It is a team-oriented challenge. Amid the growing trend of Obstacle Course Racing, this distinction sets Tough Mudder apart. It was the positive, supportive team environment that kept me smiling up and down the muddy trails of a mountain, in spite of my cynicism coming into the day's adventure.

In Tough Mudder's own words (per their website):
"We are 10-12 miles of mud and obstacles built to test your mental grit, camaraderie and all-around physical fitness. We are a team-oriented challenge with no winner, no finisher medal, no clock to race against--just an ice cold beer and a few good scrapes from a day spent outside and free from everyday bullshit. We are for anyone who has ever followed their gut, tried to defy gravity, chosen "dare" over "truth", taken risks, sought thrills, or is generally awesome at life. Turns out, it's all been training. We are made for this."

Now, I'm not totally convinced that humans were made for climbing through manmade mud tunnels under barbed wire on the trails of an off-season ski mountain in exchange for a Dos Equis and a headband. Then again...we probably aren't made to run 26.2 miles for a medal, a foil blanket and a banana, either. I suppose when we've rid ourselves of natural predators, we've got to find a way to get our thrills and make up for the general lack of danger in our daily lives. That's a post for another day...

After two years balking at Auntie Cristina's invitations to test my grit alongside her, I reluctantly agreed to sign up for Tough Mudder New England 2016. It seems like the perfect sort of event for a thrill-seeking, competition-loving fitness enthusiast. But I hesitated, finding myself hung up on this theme of self-torture that seemed to permeate the event.

I'd heard of obstacles like "Cage Crawl", where you kinda, sorta waterboard yourself while traveling on your back through water just a few inches below a cage. 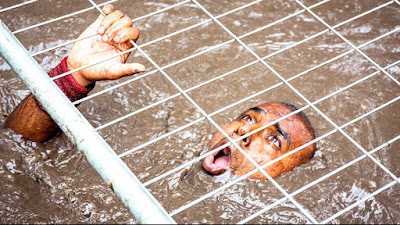 Or the infamous "Electroshock Therapy", where you run through live wires. For funzies! 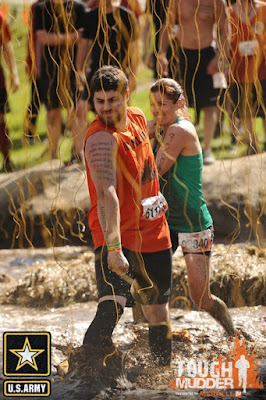 (Here's a photo of me applying the cheap strategy of "drafting" by allowing the bigger dude in front of me hit all the live wires first so I knew which ones to avoid.)

Overview
This year's event took place over the weekend of June 18th & 19th at Mount Snow in West Dover, VT. In the winter, Mount Snow serves as a ski resort in the Green Mountains. The event was ten miles long, with twenty obstacles spread over a winding course up and down the mountain. Three of the obstacles had harder or different versions for "Legionnaires", which is Tough Mudder lingo for veteran participants. Participants could sign up for either Saturday or Sunday events and our start times were staggered throughout the day to ease congestion. Most people arrived as part of a team. 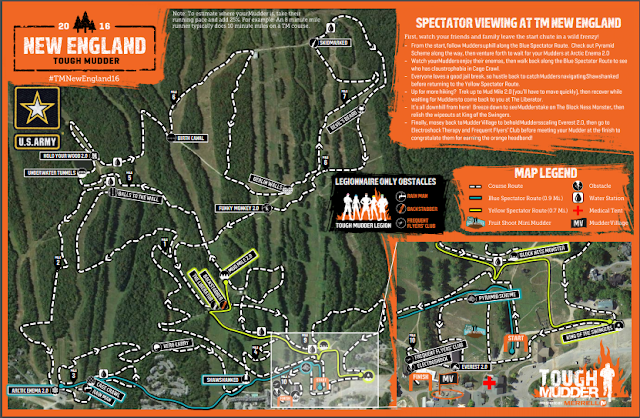 Pre-Race
I drove up from Boston on Saturday morning. By car, the trip took about 2.5 hours. It was a lovely drive, winding through the mountainous parts of Massachusetts and southern Vermont. Parking was straightforward...but also cost $20. The biggest downside to this event was the sheer volume of add-on fees. As if $150 to register for the event wasn't enough, it was $20 to park, $5 to stow a bag with the stuff you didn't want to destroy in mud, and $15 to take a hot shower after the race.

I hopped on a shuttle bus from the remote parking area and found Auntie Cristina and Uncle Sean waiting for me. Cristina and I were a team of two in this crazy event, and Sean was our impressively diligent and dutiful photographer.

The Start
After fastening my race bib to my shorts, Cristina branded my arms and legs with my bib number in permanent marker. Since the race bibs commonly become obscured by mud and/or are destroyed during the event, this branding with marker is how people identify themselves on the course. It is mostly for the sake of on-course photographers.

We wedged ourselves into a "Warm Up Zone" and were led through a brief overview of the day and some goofy warm up exercises before being unleashed to run up a short hill and over a wooden wall. 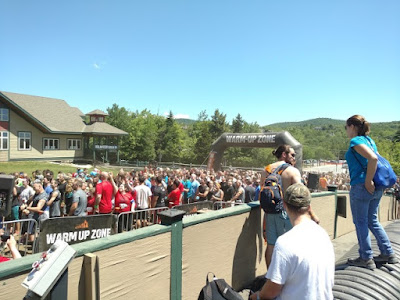 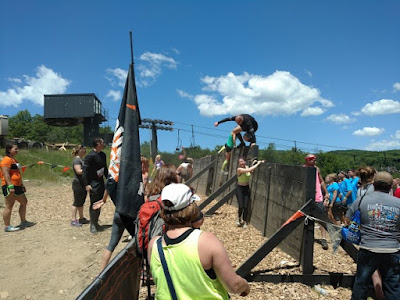 Once over the wall, we found ourselves in a holding pen which was the REAL start line. We had a moment of silence for servicemen and women. We sang the national anthem. Then we started running up the mountain.

The Obstacles and The Trekking
The first obstacle didn't come until almost the Mile 2 mark. I'm certain this was intentional, giving the crowd of eager participants an opportunity to spread out over that first uphill mile in order to ease congestion at the obstacles. We did wait on line for several obstacles, but never for more than a few minutes.

We climbed up a knotted rope over a wall for our first obstacle, Balls to the Wall. Did I mention the obstacles were named by that fraternity brother who doled out nicknames like "Han Solo Cup"?

After running some more, including through a bunch of mud, we launched ourselves down a slide into a dumpster filled with ice mud in what is known as Arctic Enema. It was admittedly exhilarating after some hot sunny sweating. 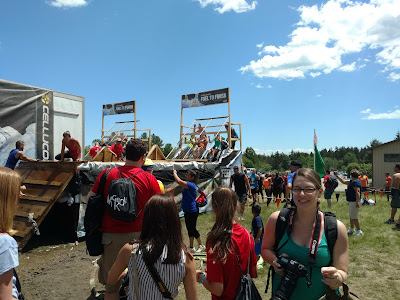 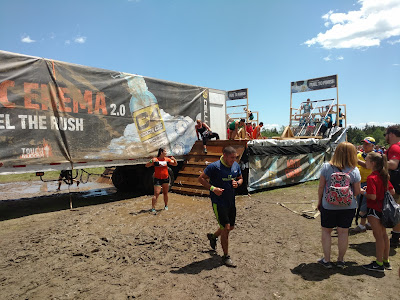 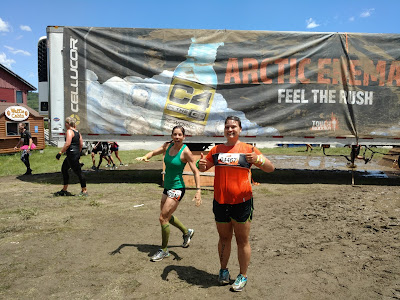 The Cage Crawl/Rain Man waterboarding obstacle, though still a ridiculous idea, was much less intense than I imagined it to be.

Then came the Hero Carry, in which we took turns piggy-backing one another uphill. Simple fun, one of my favorite parts of the race! 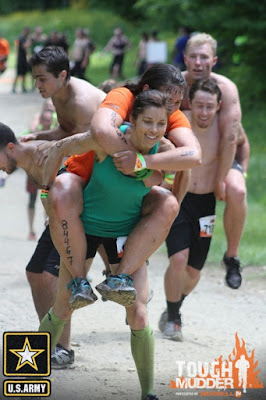 Shortly after mile 3, we found ourselves at Shawshanked. Crawl on your belly in some mud under barbed wire, then go through a big dark tunnel before plunging yourself into some more mud water. 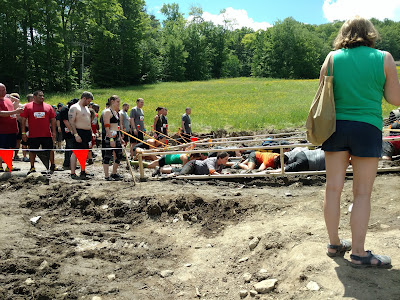 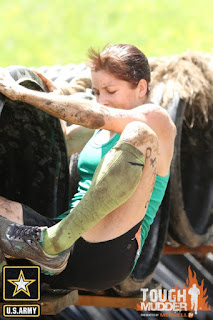 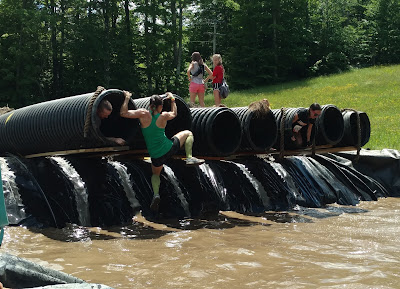 Run some more. Up a hill, down a hill. 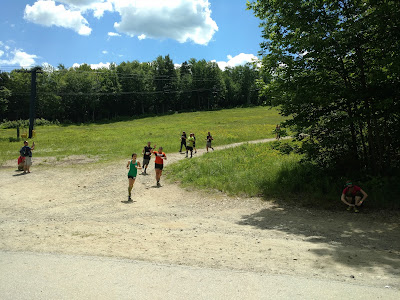 Somewhere in Mile 4 in we crawled through mud in Mud Mile 2.0 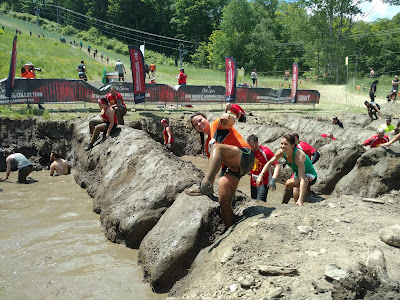 At Mile 5, we ducked in a pond in Underwater Tunnels, then carried heavy logs with teammates over and under some walls in Hold Your Wood. Yes, that is really what the obstacle is called. The next obstacle had an even more graphic name: Birth Canal. It involved squeezing your body between the muddy ground and heavy tarps filled with water.

We ran/hiked up the ski trails toward the peak and then came down through the woods in Bushwhacked. Cristina conquered Berlin Walls. 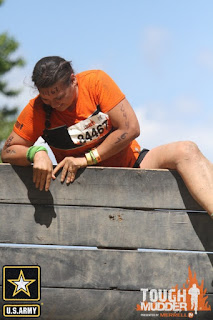 At Mile 7, we climbed over another wall with some tires on Skidmarked and crept under cargo netting at Devil's Beard.

At Mile 8, we finally reached our most looked-forward-to challenge of the day: Funky Monkey 2.0. For this obstacle, we crossed a set of inclined monkey bars and launched ourselves using a metal swing to grab hold of a suspended pole, which we traversed hand over hand to a platform on the other side of a big pool of mud water. 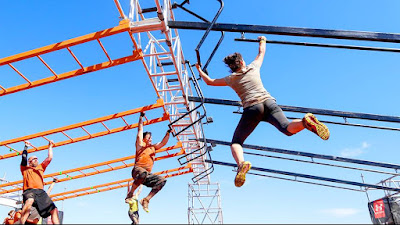 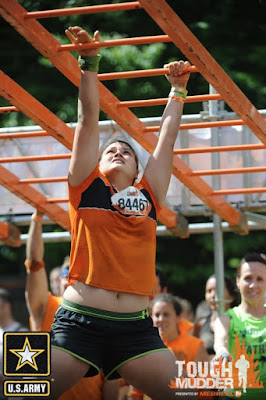 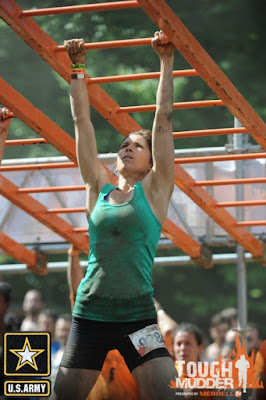 Cristina and I both nailed it!

I used a pair of wooden pegs to climb over a wall in Liberator while Cristina had to use just one peg to haul up the "Legionnaire" version, called Backstabber. 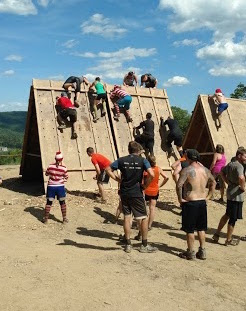 At Mile 9, we worked as a team to turn giant rotisserie blocks in mud water at Block Ness Monster. 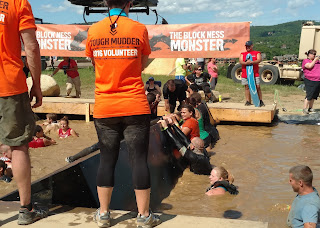 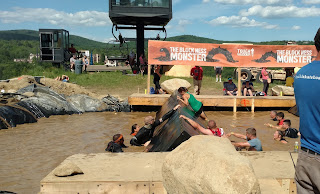 King of the Swingers was the most anxiety-provoking of the obstacles. Jump from a platform, catch a moving swing, and try to use it to launch yourself toward a bell high above the water. There were scuba divers sitting in the water in case anyone didn't come back up. Yeesh. 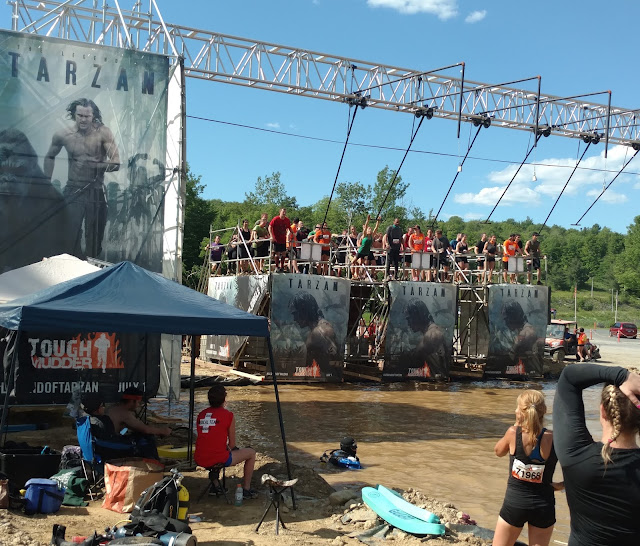 Pyramid Scheme was a fun team challenge helping one another over a long a slippery wall. 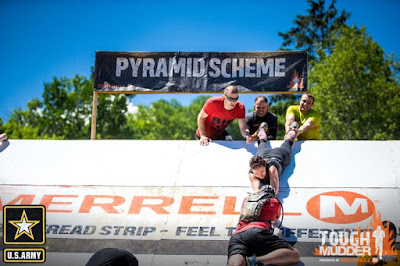 To end the race, first-timers run through Electroshock Therapy, which is exactly how it sounds. A bunch of live wires. Unless you allow a big guy run in front of you and pave the way so you don't get shocked at all, like I did. Cheat to win! 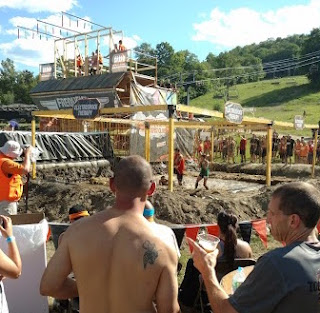 We ended the day dirty, smelly, and smiling. In spite of my skepticism about the whole event, I had a lot of fun. And the $15 shower was pretty much the best shower ever. 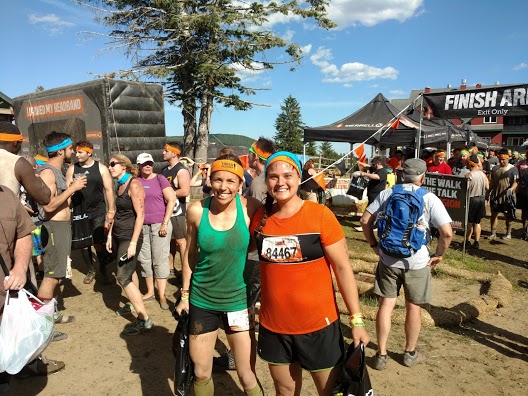