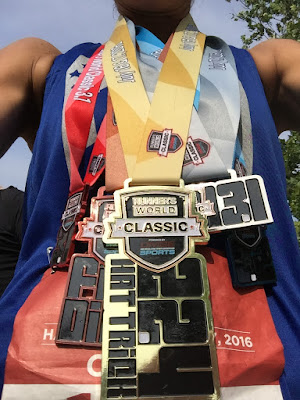 The inaugural Runner's World Classic was held in North Andover, Massachusetts on July 16 & 17, 2016. The weekend-long event included 5K and 10K races on Saturday and a Half Marathon on Sunday. Runners could sign up for any individual race, the back-to-back 5K and 10K (dubbed the "Five and Dime"), or all three races (dubbed the "Hat Trick"). The event was sponsored by Runner's World magazine and organized by Dave McGillivray Sports Enterprises. Dave is the race director of the famed Boston Marathon.

At the end of a long school year, public school employees are apt to be enticed by summer adventure opportunities. In my case, this means signing up for ALL OF THE RACES. As if my eagerness alone wasn't enough, running buddy Becca was preparing to undergo a foot surgery that would take her out of running shoes for several weeks. It probably won't come a surprise that the two of us enthusiastically signed ourselves up for the Hat Trick. At three weeks in to my Chicago Marathon training cycle, I was under strict orders to "Run easy, DON'T RACE."

Day One: "Five and Dime"
The 5K and 10K were run back-to-back on Saturday morning with a short break in between races.

Pre Race
The 5K race was scheduled to start at 7:00 am. We didn't mind piling into the car bleary-eyed at 5:30 am knowing the early start might help us avoid the July heat and humidity. Our drive from Cambridge took about 40 minutes without traffic, another benefit of an early morning start.

Parking was ample and straightforward. We were glad to have left ourselves extra time, as the walk from the parking area to the bib pickup and start area was longish and we planned to return to the car to stow our belongings. The race expo was quite small, with only a handful of vendors. This made for a quick and easy bib pickup.

We ambled to the start area to warm ourselves up a few minutes before 7:00.

5K + 10K Courses
The official race website described the courses with the following:

"The race courses will feature a start and finish with the beautiful campus of Merrimack College, undulating courses to keep you honest through historic downtown Andover and past the famous grounds of Andover Phillips Academy and through a tree-lined, shaded residential community."

I am often amused by the wordsmithing used in course descriptions to make them sound beautiful without being outright dishonest. While the looped 5K route was relatively flat, "undulating" was a modest description of the 10K course. The placement of a sizeable hill in the raw sun at mile 3 made for an interesting challenge. I think the "tree-lined, shaded residential community" was synonymous for "kinda boring suburbia with a few trees". These were fair, fun, and challenging courses, but the scenery of Merrimack College and surrounding community was not particularly memorable. 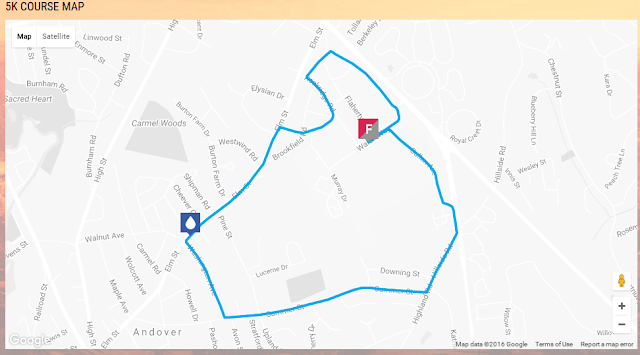 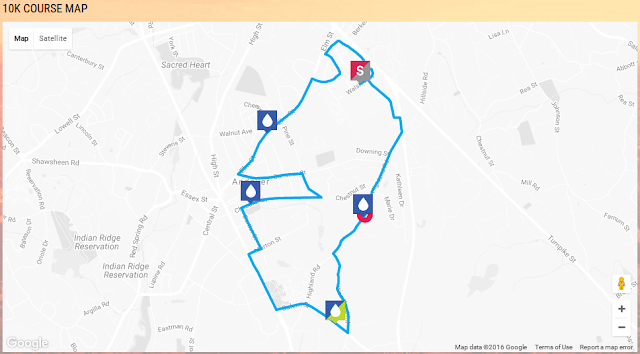 The 5K Race
With a total of 863 runners, the 5K start was busy but not overwhelmingly crowded. After a few announcements and the playing of the national anthem, we were off and running moments after 7 am. 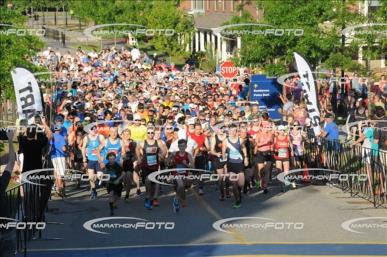 Knowing that this was the first of three races and we had plenty of running ahead of us, my goal was to run conservatively in the 5K. I've learned from experience that short, fast races are toughest for my body to recover from. The Hat Trick would be scored by the total time of all three races, so I wagered that running a minute or two slow in the 5K wouldn't significantly affect my overall time.

Becca and I ran the first mile of the race together per my promise to set us a pace just over 7 minutes per mile. I glanced down at my watch as it buzzed the first mile. 6:28. Man, I really do suck at starting reasonably. "Run easy, DON'T RACE," echoed in my head. I apologized to Becca for being an idiot and promptly slowed myself down.

The early start time and flat, shaded course made for a relatively cool and uneventful race. I finished in 21:48 and attempted to flash a toothy grin and Richard Nixon fingers at the camera man. 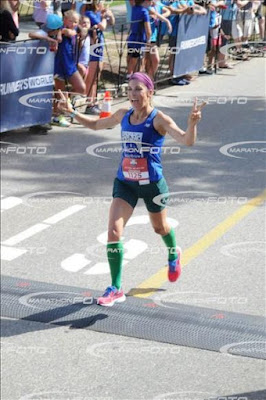 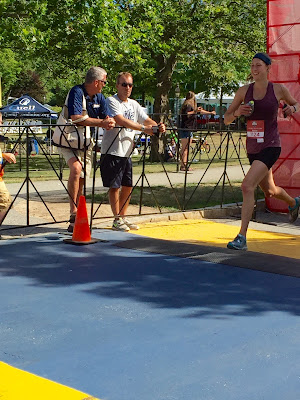 What the Runner's World Classic lacked in scenery, it made up for in generously doling out prizes. In addition to medals for race completion, the top three male and female finishers in each five-year age group were awarded commemorative glasses. This was not a particularly fast race field. In spite of following the DON'T RACE command, I finished 1st in my age group, and speedy young Becca finished 2nd in hers. 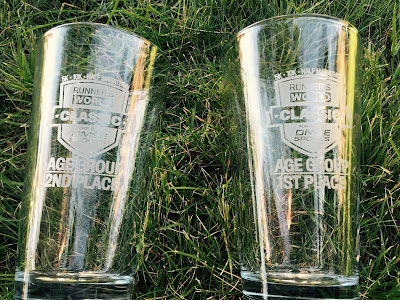 The 10K Race
The 10K race began at 8:30, giving us about an hour of rest between races. I dropped off my new loot, snacked on a date, drank water and walked around to stay loose.

The 10K start was nearly identical to the 5K, except that it had been moved back by 100 meters. There were 752 runners in this race. A few words, the national anthem, and off we went. By now, it was 83 degrees Fahrenheit and climbing. The 10K followed a similar route to the 5K for the first 2 miles. Mile 3 was one long, slow hill in the sun. Whether it was heat, hills, or weary legs, this race felt gnarly. See evidence in the following photograph. 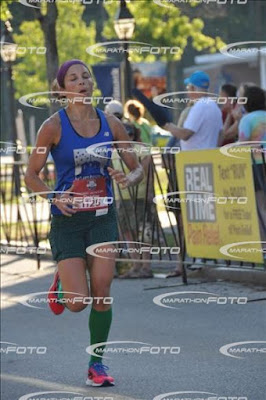 I pulled myself together for the finish. There was no hope of racing this time around for me. I just wanted to get myself out of the sun and into some air conditioning. It seems that I was not alone in my suffering. A very modest 10K finish time of 46:25 somehow earned me 2nd place in my age group. 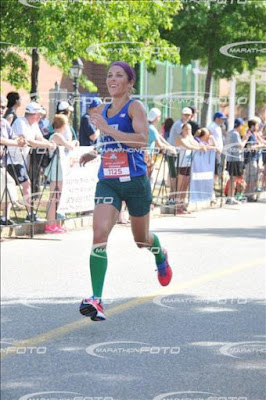 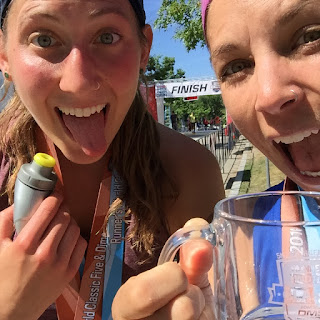 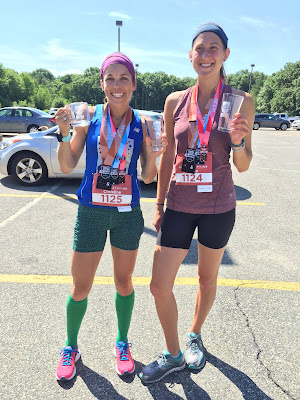 We wandered the post-race festivities for a little while, intending to stick around for the "Celebrity Mile" and a running seminar in the afternoon. The celebrity mile race was an exhibition event featuring local running favorites, including Runner's World's Bart Yasso and David Willey, 1968 Boston Marathon winner Amby Burfoot, Dick Hoyt of Team Hoyt, and Boston Marathon Bombing survivor Adrianne Haslet. In spite of our desire to participate in the full breadth of festival offerings, a free hot dog and generic lite beer seemed less appetizing than an iced coffee and a shower, so we hit the road and were back in Cambridge in time for lunch.

Day Two: A Half Marathon completes the Hat Trick

Pre Race
By Sunday, we were familiar with the logistics of the event. We already had our bibs, so we allowed ourselves a few minutes extra rest, arriving at Merrimack College with time to park, use the bathrooms, and que for the Half Marathon.

The Half Marathon Course
Just as Saturday's races had, the half marathon started and finished on Merrimack College campus. This race took runners out to downtown Andover, with a few rolling hills with one long climb from mile 8 to mile 10. There were 3 Gatorade/water stops and 4 water-only stops along the course.

Here's the map and elevation: 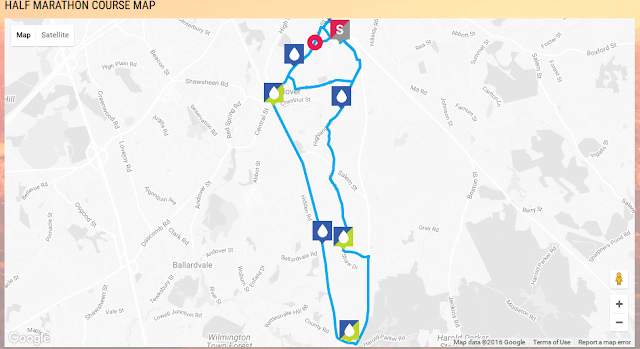 The Half Marathon Race
After Saturday's arduous 10K sweatfest, I felt grateful for the 7:00 am half marathon start time and noticeable cloud cover.  I jumped up and down in the corral and said hello to Eric from Slumbrew Happy Soles. There were 546 runners in the half marathon. Off we went for round 3. 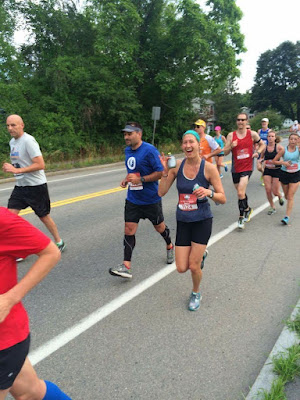 I was much more disciplined at DON'T RACE on day two. For the first 4 miles, my legs felt like lead, which kept me slow and humble anyways. We ran a small loop twice around Merrimack College campus before heading south past Phillips Academy Andover. It took a long while to settle in, but a short uphill at mile 5 followed by a long downhill that lasted until mile 8 broke things up and got my legs going.

We made a turnaround and began heading north. Miles 8 through 10.5 were a steady uphill grind, broken up by a few short plateaus. I had a clear view up the hill and recognized the hat and running gait of a familiar local race adversary several hundred yards ahead of me. Our rivalry is purely one-sided, as this runner has no idea I exist and is also far more accomplished than I. But still. I saw her, recognized her, and decided to reel her in. Keeping it slow left me feeling strong, and my legs remembered how much I enjoy the satisfaction of cresting a tough hill after a good grind.

Becca and I did a lot of radio listening on our drives back and forth between Cambridge and North Andover. Don't ask me how we came to this decision, but by Sunday morning we had adopted Miley Cyrus's song "Wrecking Ball" as our unofficial race weekend anthem. And we probably listened to it ten times.


I wore headphones for the half marathon. By some measure of pure chance or divine intervention, my Spotify playlist shuffled to "Wrecking Ball" at the exact moment when I furrowed my brow and quickened my steps to take on that big hill. It was with Miley bellowing in my ears that I stormed past my rival and never looked back. 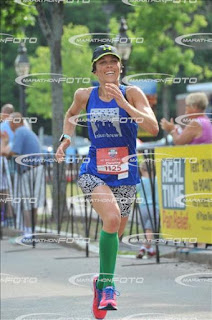 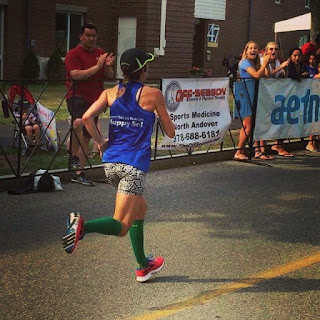 Although I did not again see my rival, I did get totally burned by a woman who let it fly for the last 400 meters of the race. New adversary! I finished the Half Marathon in 1:40:03 and took home another 2nd place glass for my age group. Overall, I was the 17th finisher and 5th place woman in the Hat Trick with a total combined time of 2:48:16 for the 22.4 miles.

Becca sprinted to the finish, as always. 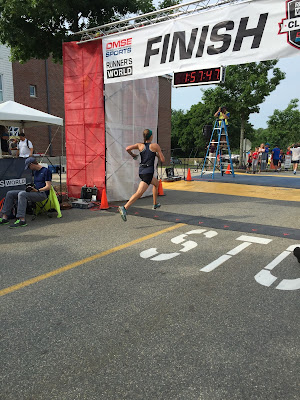 In addition to our prize glasses, Becca and I each received finisher medals for the 5K, 10K,  "Five & Dime", Half Marathon, and "Hat Trick". Yes, five medals. For one event. So ridiculous, we could barely stand up straight. 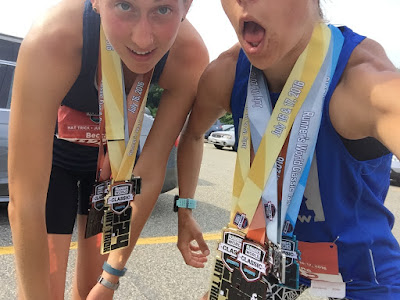 All in all, hot hot summer fun for everyone! 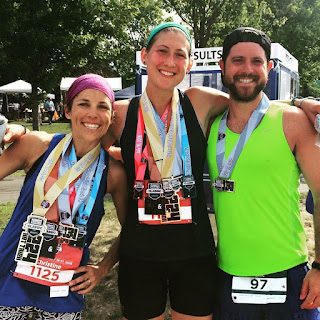 P.S. Regardless of your feelings about Michael Phelps, this commercial from Under Armour is worth a watch. Sometimes the Olympic athletes make what they do look easy, and it's important to be reminded that these competitors put MASSIVE WORK into their training.

More importantly! Though the Rio Olympics are over, the Rio Paralympics are set to begin in just 13 days on September 7. Here's a video to get you excited for the absolutely incredible feats of human strength, determination, and will.

Slogging through runs in the hot, hot heat

Today in Boston, the temperature climbed to the mid-90s with "oppressive" humidity.