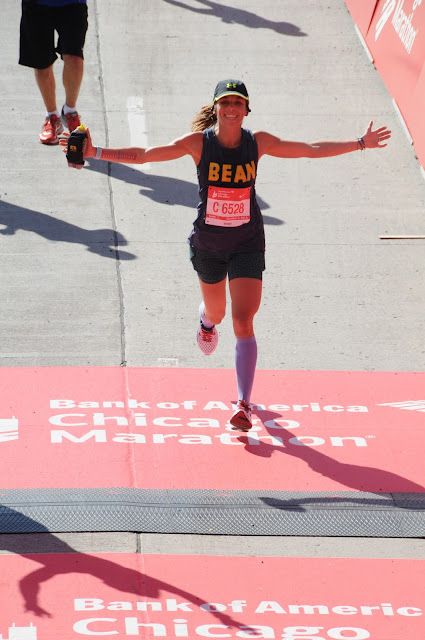 I have been working hard to make every single second count since the day I found out I missed qualifying for the 2016 Boston Marathon by exactly that margin.

The weather was phenomenal. The course was flat and fast. The crowd support was electrifying.

The race was hard. It was fun. It was everything. I didn't know it was possible to feel so happy while running a marathon.

The Day Before
I traveled to Chicago on my own. My flight arrived early Saturday morning, and after dropping my bag with my AirBNB hosts in the Wicker Park neighborhood of Chicago, I hopped onto the CTA Blue Line "L" train toward downtown Chicago to check out the race expo and pick up my bib.

The Abbott Health & Fitness Expo was held at McCormick Convention Center. I opted to take advantage of the free shuttle buses running from downtown locations to the expo. Although lines for the shuttles were long, buses arrived and departed quickly. I waited about 15 minutes for my ride before sliding in to a yellow school bus seat.

My seatmate and I began chatting. She introduced herself as Angie. I asked whether she'd completed many marathons. She had. Like a ton. All over the place. As she was describing some of her running achievements and experiences, she casually slipped in, "My boyfriend works for Runner's World, so I'm meeting him at the Expo." A few minutes later she referred to her boyfriend as "Bart."

Yup, Bart Yasso, "The Mayor of Running" and author of the book My Life on the Run. Bart was scheduled to give a seminar at the Expo about his book. When I Bart this year the day before the Boston Marathon, I running nerded out: 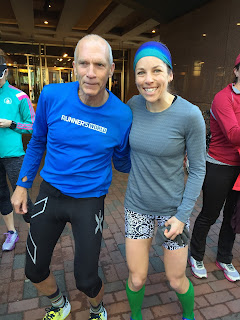 Upon arriving at the expo, I followed the crowd to retrieve my race bib, t-shirt, and gear check bag before exploring the 200+ vendors and exhibitors peddling official marathon merchandise, running gear, goos, and gizmos. The huge space felt really crowded. A massive line had formed for customized Nike running t-shirts. I didn't stick around to find out whether or not this was free, because the long line didn't seem worth it either way. I was briefly accosted by a vendor who offered me a free spinal screening. I caught the Runner's World course preview and information session. Hearing the details of the course helped me feel more confident about how I would run it. 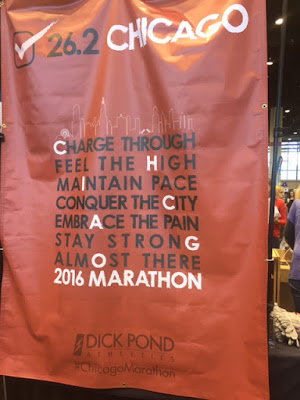 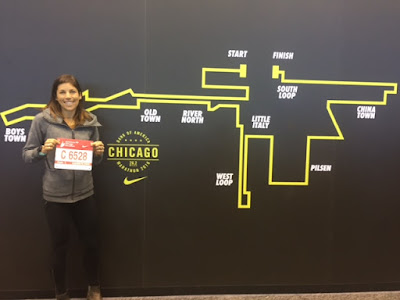 With Whole Foods hot bar dinner in hand, I retreated to my AirBNB. I donned the bathrobe and slippers left for me by my hosts, laid out my race outfit, made a pot of peppermint tea, and put my feet up to watch reruns of Parks and Rec on Netflix. I climbed into bed at 8:30 p.m. and slept surprisingly well, apart from a brief 1:30 a.m. wake up when a crew of boisterous young men decided the alley next to my window was a good place for late night public urination. Ah, city living. 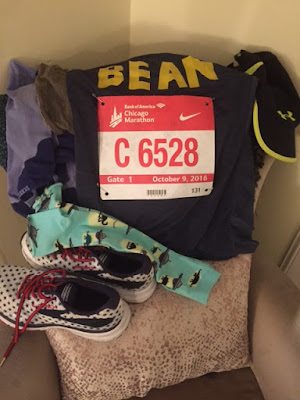 Race Morning
I woke before my 4:40 a.m. alarm. Silently and methodically, I dressed, ate peanut butter and banana toast, and swallowed a mug of tea and a glass of water. I applied a pacing tattoo to my inner arm to keep track of my splits along the way in case the GPS in my watch went awry (this proved to be a good choice - the GPS was waaaaay off.) I jammed race fuel into one pocket of my shorts and a plastic Ziploc bag containing my phone, ID, and credit card in the other. I filled my handheld water bottle with electrolyte drink in the bathroom sink.

The race provided a clear plastic gear check bag for each participant to leave at the finish area. I packed mine with a sweatshirt, post race snacks, and house keys before setting off into the dark morning. I made a brief stop at Dunkin' Donuts for a coffee on my way to join other jittery runners on the Blue Line train. We exchanged nervous good luck wishes as the train rattled toward Grant Park. 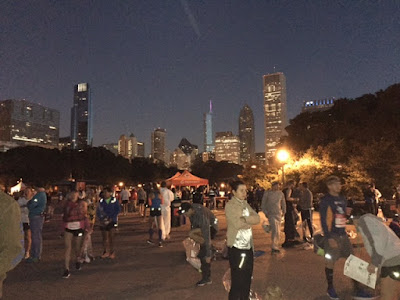 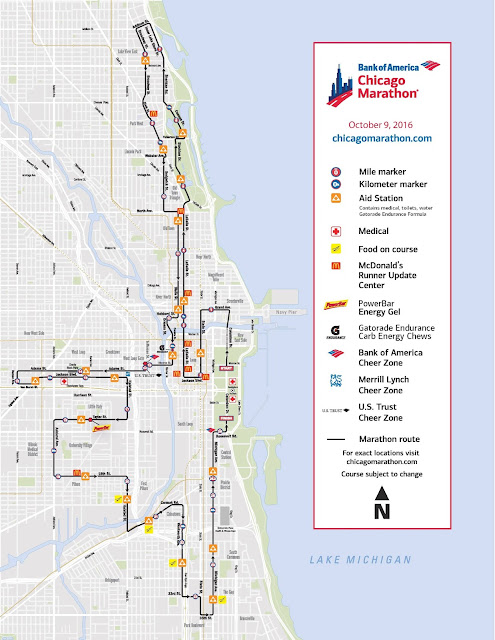 The Start
The Chicago Marathon is a massive event. 41,000 runners big. All of Grant Park was closed to the public to host the race staging area, and participants were filtered in to the park through specific entrance gates based on our assigned start corrals. I found my way through my entrance gate and dropped my bag at the red gear check tent.

The race starts in two waves, with each wave broken up into several assigned corrals. The first wave begins at 7:30 a.m. and the second at 8:00 a.m. To my relief, my qualifying entrance time granted me a position in the first wave.

With 45 minutes to the start, I ate half a Honey Stinger waffle and sipped a cup of water while chatting with a few runners. A quick port-a-potty stop and I flashed my bib to gain entrance into Corral C. It was a cool 50 degrees.

The corral system at the Chicago Marathon meant that I was grouped with other runners who had entered qualifying marathon times at paces similar to my own. The 3:25, 3:30, and 3:35 pacing groups were all in Corral C. This meant that, in spite of the enormous crowd of runners, we shouldn't be tripping over any slower runners ahead of us.

When the corrals were sealed off at 7:10, dozens of runners who'd still been waiting in port-a-potty lines began scaling the fences to get in. At 7:20, a local opera singer sang the national anthem. As she belted "...and the home of the brave!" hundreds of runners in unison stripped off our "throwaway" sweatshirts and tossed them toward the donation bins located along the corral fence. At 7:30, a horn blared and the crowd inched slowly forward. 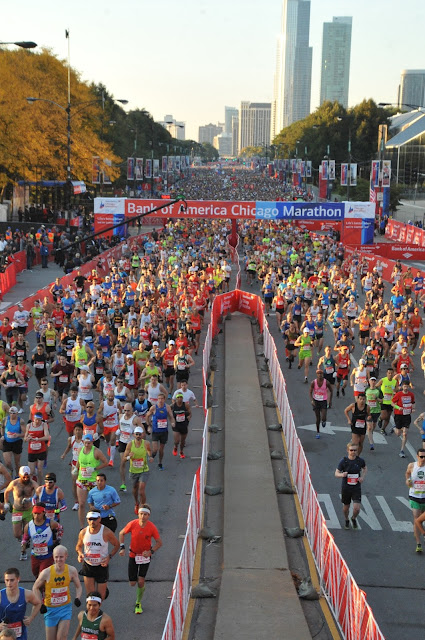 Miles 1-5: The Loop
Almost immediately after exiting the north end of the park, we entered a tunnel on Columbus Ave. So much for accurate GPS. Inside the tunnel, the unified footfalls of thousands of runners echoed eerily. Despite being shoulder to shoulder across the broad street, our seeding by pace meant the crowd of runners undulated as one big wave. There was fairly little jockeying for position. We emerged from the tunnel to cross a bridge and the first mile marker flashed by in a blur. I mentally reviewed my plan: Be conservative. Don't get swept up. Keep it close to 8:00/mile. 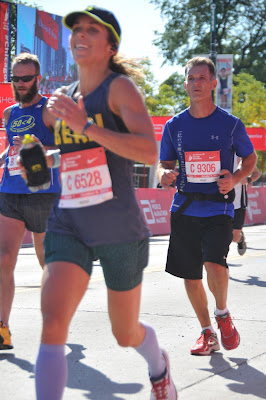 Miles 5-10: Lincoln Park & Lakeview
Friends Dave and Lara were coincidentally in town visiting family, and I knew they'd be waiting somewhere near Mile 5. I squinted to scan the crowd as we entered Lincoln Park, but I couldn't find them. Amid the throng of runners, they couldn't find me either. But look at how awesome they were! Thanks for being out there, guys. It meant so much. 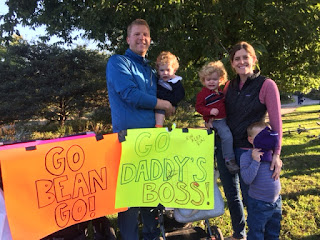 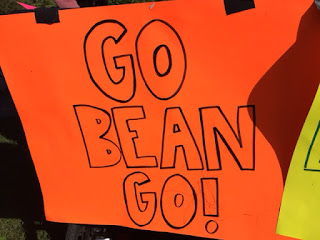 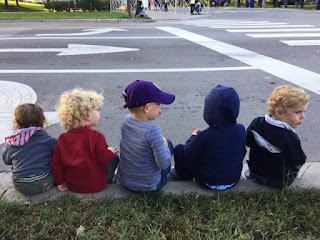 We continued north through Lincoln Park, where there was plenty of green and the field opened up. I began chatting with a kind and encouraging woman who told me she was sure I'd get my BQ today. As we neared the northernmost point of the race between the mile 7 and 8 markers, I noted that I'd been drifting ahead of pace. I waved her on to let myself slip back onto pace again. Don't be greedy in the first half. Somewhere around Mile 9, I decided to listen to music for a while and settle into a groove.

Miles 11-16: Old Town, River North, West Loop, Greek Town
Again, I found myself drifting farther ahead of the 3:25 pace group. This was starting to make me anxious, and I felt a familiar twinge of doubt. I'd needed to pee since mile 1, so when a bank of Port-a-potties came into view on my right, I made a split second decision to go for it.

I had to wait my turn behind another runner, and the detour took me about a minute in total. When I emerged from that port-a-potty, it was as though a switch had flipped inside me. My body felt better. I'd slowed down my heart rate. I shook off the nervous funk. Refreshed, I set off to methodically catch back up to the pace group over the next mile. I focused on following the "Blue Line", a dashed blue strip of paint running through the entire course to mark the shortest route. 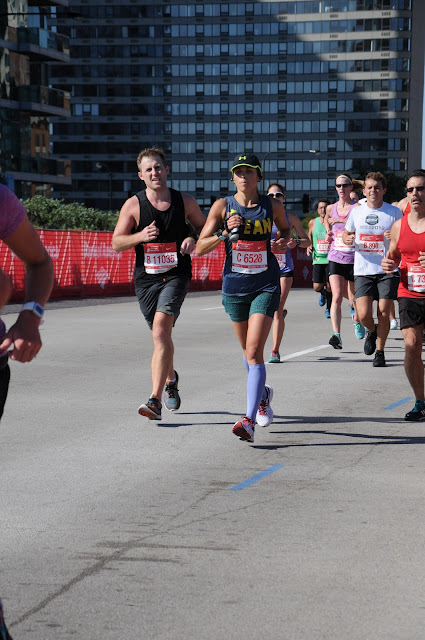 I came through the half marathon mark feeling strong. There were so many fans! My name was taped across my chest in bright yellow, and I constantly heard strangers cheering "GO BEAN!". Mile 14 was the Charity Block Party, and many of the charities for whom runners had raised funds were lining the street, offering cheers and high fives to runners.

Miles 17-21: Little Italy, University Village, Pilsen
I felt a big burst of energy during this stretch, and I started to throw in some 30-60 second strides to mix up pace in hopes of keeping my legs fresh. The one downfall of a super flat course is that you use the same muscles in the same pattern repeatedly. So since there were no hills, I tried to "be the hill". Just before reaching mile 21, we crossed a big iron bridge. Fans had climbed and were sitting atop the bridge, screaming for the runners. It felt surreal. 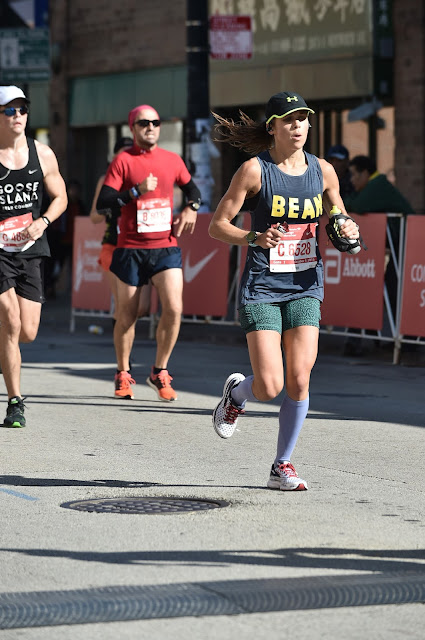 Miles 21-Finish:
As the 21st mile marker came into view, I recognized a small sensation of fear in my belly. Some runners around me were starting to fade. This is where the real racing starts, I told myself. There is no wall. I did a body check. Feeling pretty great, actually. There is no wall. As I crossed the 35k timing mat, I thought of all my friends and family following my race from afar thanks to the wonders of the internet. 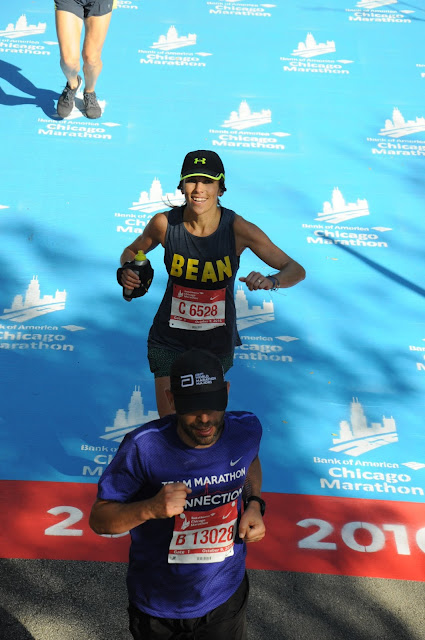 At mile 23, I could feel that my legs were growing heavier, and running was starting to require more effort. My pace had dropped, just a little. I had my eyes set on the Blue Line. Ride the wave, I thought. It will pass. I focused on running one mile at a time. Just this mile.

When the mile 25 marker came into my view a few hundred yards away, the wave of discomfort did pass. The only thing I could think of now was ONE (expletive, expletive) SECOND. I found myself passing runners. ONE SECOND! At Mile 26, we traveled up a small overpass ramp, turned left, and there it was. The finish line 200 meters ahead. I let out everything I had and pushed forward to the finish with a grin from ear to ear. 3:25:10. That's a PR by 7:23 and gives me a 9:50 cushion under the Boston Marathon qualifying standard. 2018 Boston Marathon, here I come! 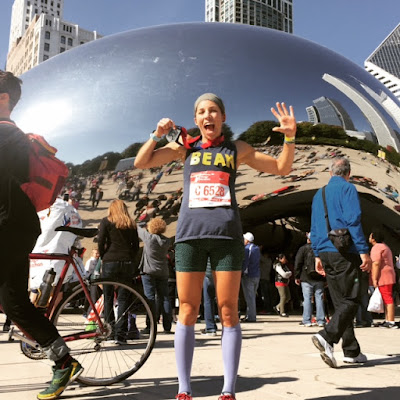 The Chicago Marathon was some of the happiest running I've ever experienced. I've been basking in the glow all week.  If you're trying to decide on a marathon and you like big city running, DO IT. 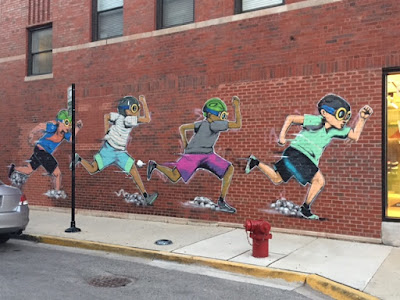 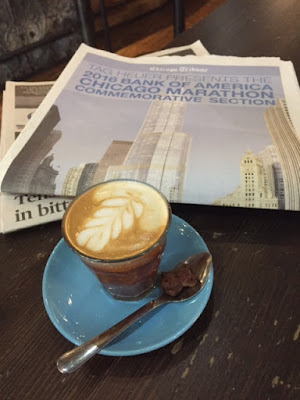 When I returned home to Cambridge, Becca and Carly treated me to a very special celebratory vegan brownie sundae at Veggie Galaxy... 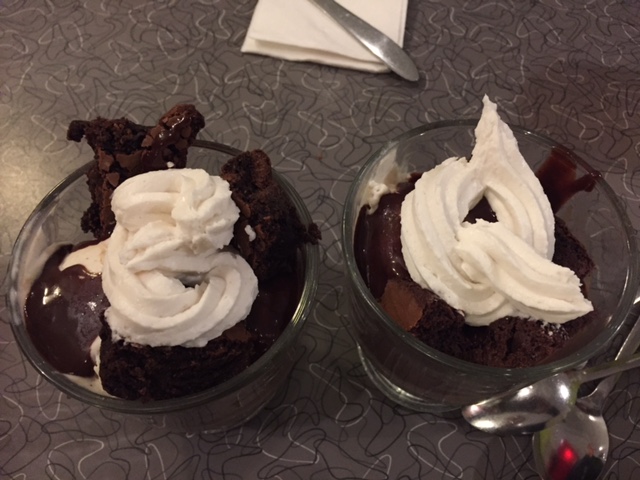