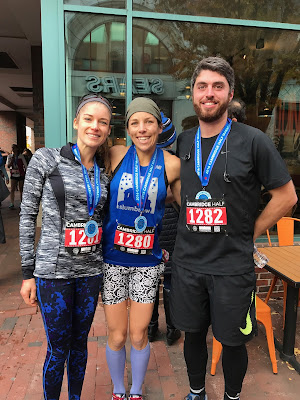 The inaugural Cambridge Half Marathon on November 13, 2016, was an eagerly anticipated event in my life. I spent months badgering everyone I know to join me in a race through our home city. I successfully coerced my husband, Chris and my sister, Carly, to run. It was Carly's first ever half marathon!

The race was organized by my favorite race directors at Cambridge 5k Race Series and it benefited two local organizations, Cambridge Camping and Belmont S.P.O.R.T.

*Notes: All the splits I report are from my watch, so they're not official. A few of these photos are borrowed from the Cambridge Half Facebook page. 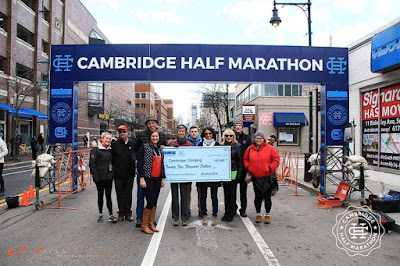 Pre-Race
I volunteered to help out at bib pickup at the Cambridgeside Galleria on Friday evening, so I had bibs and t-shirts for my family ahead of time. On Sunday morning of the race, I woke, ate breakfast, and jogged the one mile from my apartment to the Galleria at 6:45 am to get settled.

The race day headquarters, including bag drop, port-a-potties, and post race party were all located inside the Cambridgeside Galleria parking garage. This setup was convenient for organization and ensured a lively, weatherproof party...but it was also dark, cold, basementy, and permeated by distinct aroma of port-a-potty.

Upon arriving in the garage, I dropped my bag at the Slumbrew Happy Soles team tent, peeled off a few layers, and got a hand stamp for post-race beer.

The Course
Closing down major streets in Cambridge is no small undertaking. I took so much pleasure in blocking traffic with thousands of runners on Massachusetts Avenue on a Sunday morning. The half marathon course took runners through East Cambridge and Inman Square, past Harvard University, twice through the vehicle-only Cambridge Street Tunnel, up Massachusetts Avenue, onto the Alewife Linear Path, to Belmont Center, around some alleys and a parking lot, and through a large city park. The course was varied! It was flat, with just enough gentle hills to keep things interesting! It went by my apartment! I am certainly biased by hometown pride, but to me, this course was perfect. It probably doesn't hurt that it happened to be 50 degrees, mild and sunny.

There were 6 water/Gatorade stops and 5 medical tents on the course. Each water stop was staffed by volunteers from a different local organization. Crowd support was modest in size but large in enthusiasm. 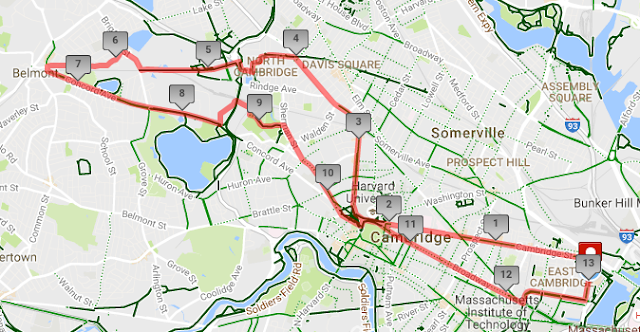 Race Start
Runners were shepherded from the parking garage to the start area at 7:30 am. Feeling a little intimidated by the field size of 5,000 participating runners, I snuck off ahead of the mob to wedge myself into the corral on First Street. Volunteers held up pace signs to help runner self-seed. The morning was chilly, so I'd come wearing a throwaway sweatshirt and cheap knee socks-turned-arm sleeves to keep warm. I stripped these off and tossed them outside the corral. 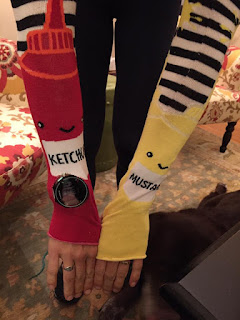 Having run the Chicago Marathon one month ago, I came into this race feeling confident about running, but unsure of realistic performance expectations. I hadn't trained specifically for a half marathon, and most of my running in the weeks leading up had been easy paced to support my body's recovery from the marathon. I always need to have a race goal, so I set an intention to start conservatively and run negative splits today. "Negative splits" means I planned to gradually speed up, making my second half of the race faster than the first. If you know me, you know this level of discipline is a challenge! I tend to take the less conservative "fly out of the gates and then hang on for dear life" approach to racing.

Within minutes, I was flanked in the corral by familiar runners. One more perk of running a hometown race. We exchanged well wishes, shook out our limbs, and listened to the national anthem. The horn sounded and we inched forward. 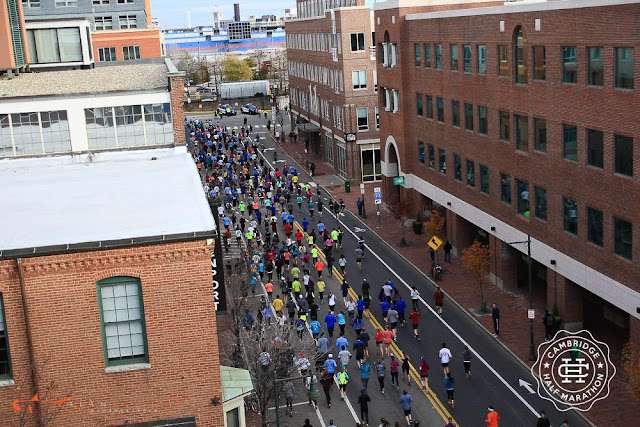 Miles 1-3
After crossing the start timing mat, we turned left onto Cambridge Street. We crested and descended a small hill. My legs were filled with early race excitement. As we passed the first mile marker, my watch buzzed and flashed 7:00 even. A little fast, so I settled myself down and slowed the pace.

After mile 2, we trundled through the Cambridge Street Tunnel at Harvard University and peeled up Massachusetts Avenue heading north. I grinned and waved to my coworker Abbie, who was supporting enthusiastically at Porter Square near the 5K mark. (7:00, 7:13, 7:04)

Miles 4-6
At the mile 4 marker, we turned left onto the Alewife Linear Park, a paved mixed-use bicycle and pedestrian path. It carried us around Russell Field, home of the CRLS Falcons football team, and behind Alewife T Station onto the Fitchburg Cutoff Path. I admired the scenery of marshland juxtaposed with industrial overdevelopment and abandoned railway.

Along this flat stretch, I began playing leapfrog with a tall man. We took turns leading and following over 3 miles. I noted my preoccupation with his proximity and made a conscious effort to ignore him. Tunnel vision. Don't get caught up in racing this early. (7:04, 7:07, 7:06)

Miles 7-9
We turned off the bike path and into a residential neighborhood in the town of Belmont. We crossed a 10K timing mat before making a hairpin turn at Belmont Center to begin our return trip back to Cambridge via Concord Avenue. As we passed Belmont High School, I spotted Dave and Lara's kids amid a throng of children. I high-fived four-year-old Walter.

Concord Ave has a long, gradual incline on the way back to Cambridge. I know that I tend to find strength on hills, so I decided it was time to lose leapfrogging tall guy once and for all. I dug in and smiled smugly to myself as I left him behind, running mile 8 foolishly fast.

We reached Fresh Pond in Cambridge and turned left down an alley behind the Trader Joe's, past some dumpsters and under a bridge below Alewife Brook Parkway. I enjoyed sloleming around potholes as we crossed the Apple Cinemas parking lot and turned into Danehy Park. Amusing fact: The steepest hill of the entire race was here in the park, to the top of a capped city landfill. (7:11, 6:54, 7:02)

Miles 10-11
What goes up must come down, and I hurtled down the other side of the landfill and out of Danehy Park. Now we were heading back toward Harvard Square. I had been trailing behind a coworker for miles, and I finally caught up to her outside Harvard Square. We exchanged greetings and good lucks.

I performed a mental check of my body and decided I was feeling strong. Time to pick it up a little. I surged back through the Cambridge Street Tunnel, emerging to a small but energetic crowd of high schoolers outside CRLS. I noted that the 11 mile marker appeared to be a few hundred yards early.

As we crested the last small hill on Broadway, my eyes caught a glimpse of folks from the November Project weilding a sign that read "Commence Beast Mode." I smiled toward them and promptly heeded their advice. Soon we passed my apartment, where the employees and patrons of the local barbershop were bemusedly watching us dummies run by. I charged on, now reeling in and passing runners one at a time. (7:00, 6:50) 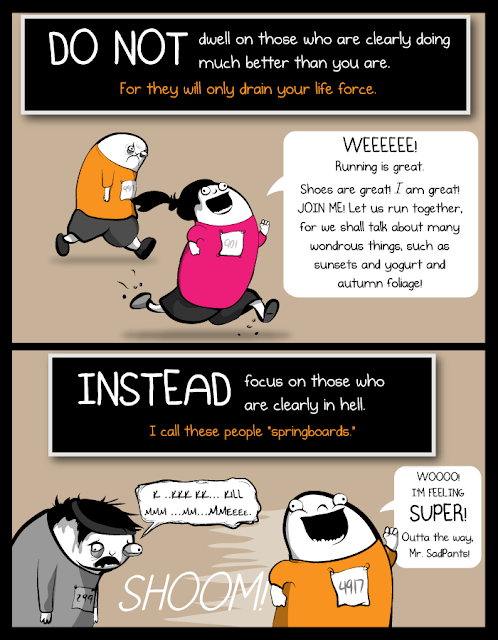 With springboards in mind, I turned onto Binney Street and into the last mile of this race. At last, the final turn onto First Street! My heart skipped a beat as I squinted at the finish line, which appeared to be 100 miles away. I'd tricked myself into forgetting that this road has the longest finishing chute of all time. Still, I could just make out the time on the clock overhead and I knew if I propelled myself to see this thing through I wouldn't regret it. I grinned my way across the finish line. (6:47, 6:37) (1:18(.2)) 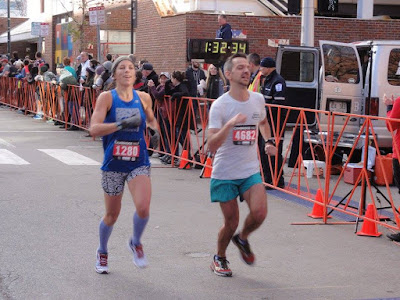 Check out those negative splits! 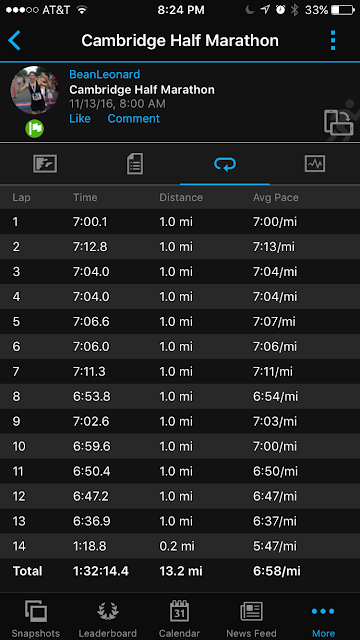 I collected my medal and found Happy Soles captain Eric, who'd finished looong before I did and earned a PR of his own. Together we cheered in our loved ones and teammates to a cascade of impressively fast finishes. This course gave runners wings!

Becca nailed her race with a trademark all-out-sprint finish. 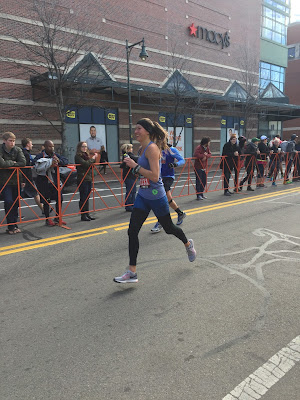 I beamed with pride as Chris finished his race in 1:56:04 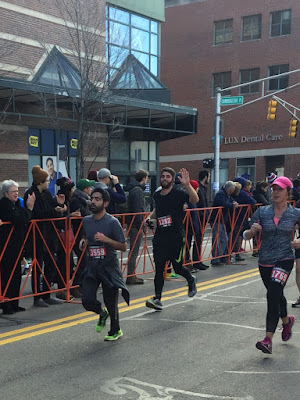 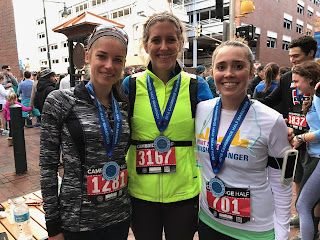 And Carly? The young lady who loathed running just one year ago finished her first ever half marathon in 1:57:07. And she loped across the finish line like it was totally no big deal. 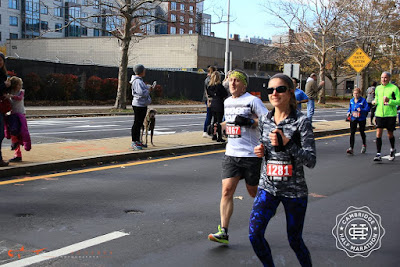 She already signed us up for another half marathon. Who wants to join us in the Newburyport River Run Half Marathon on May 7?

Post Race
The after party in the parking garage was loud and raucous and fun. Slumbrew, Notch, and Bantam Cider provided libations and a handful of vendors offered snacks. 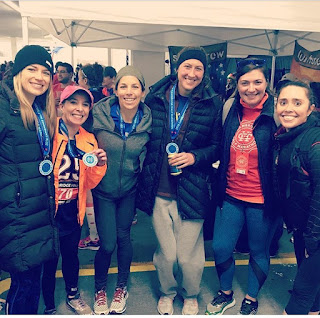