Much of my inspiration to write comes when I'm out on a long run. Somewhere along the banks of the Charles River or amid the hills of Somerville, my body finds a rhythm and my brain slows down enough for thoughts to flow with far less judgment and self consciousness.

Which, perhaps, is part of the reason why nearly three months have passed since I've written a blog post. That little injury I picked up on an ill planned long run in January? It snowballed into a four months, and counting, string of rehabilitation exercises, MRIs, injections, adjustments, massages, scraping, dry needling, cupping, and wallowing. A nasty IT band injury reared its head along with the lumbar herniation and sciatica screaming down my leg. There have been ups and downs in the process of healing, but not a whole lot of running.

Instead of racing through the winter and spring as I planned, I gave up my race bibs and cheered from the sideline. The transition from participant to spectator proved to be both challenging and rewarding. 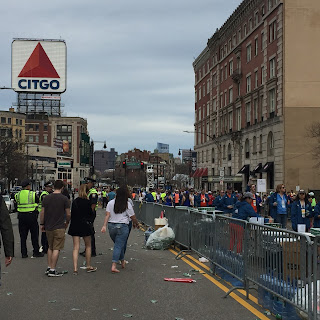 I've balked at doctors who recommended drugs to ease my pain. When a spine specialist confirmed via MRI that a herniated disc in my low back was responsible for the radiating throb, stabbing sensations, stinging, burning, and cramping down my left leg, I reluctantly agreed to an epidural steroid injection because I hoped it might allow me to sleep more than two hours per night. It did not work. It did confirm my opinion that a traditional medical approach of a belly full of pain pills and a body full of steroids is not for me. Instead, I've become rather adventurous when it comes to experimenting on my body with alternative treatment approaches.

Here's a sampling of the methods of rehabilitative torture I've dabbled in:

I've seen three physical therapists. The first was not a good personality match for me. He admitted to being an anti-runner. The second was a better fit, but our hours didn't line up and he prescribed the same clamshells and hip lifts I've been doing routinely for years. Then, my mother-in-law urged me to make a trip out to Hopkinton to see the physical therapist who'd helped treat her injuries. It was a long hike down the Mass Pike to get to her, but Kim gave me the Ah ha! I needed. "You're plenty strong," she explained, "but your hips, glutes and IT band are seriously tight." Strengthening to correct imbalance would be important, but she wanted me to first focus on targeted, sustained stretching after exercise to help things loosen up. So I stretched and stretched. Every day. Within a week, my poor, lopsided pelvis felt decidedly less crooked and the constant sensation of tightness was slowly easing.

A chiropractor has been scraping my low back, butt, and leg with a variety of metal spatulas using the Graston Technique, a self described "form of instrument-assisted soft tissue mobilization that enable clinicians to detect and effectively break down scar tissue and fascial restrictions". It's felt modestly effective and mildly medieval. 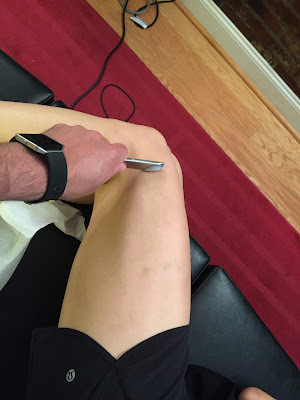 Every three weeks or so, Liv, the amazing yoga teacher and orthopedic massage therapist has been using her magical hands to work out the tight junk and helping my body get more relaxed and evened out. In our most recent appointment, we gave cupping a try on my IT band. This therapy/experiment involved placing glass jars on the skin of my left upper leg. Using a handheld pump, Liv suctioned the air out of the jars to create a vacuum, drawing underlying tissue partway into the cup. The idea is that this works like the inverse of massage. Rather than putting pressure on the muscles to urge release, the suction pressure lifts the tissue upward, theoretically allowing for enhanced circulation in areas that are gummed up. It looked gnarly (warning, gross picture below) and left me with some epic leg hickeys. But it felt pretty good. 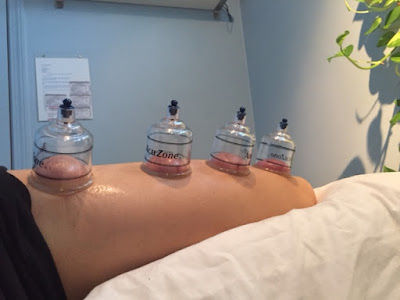 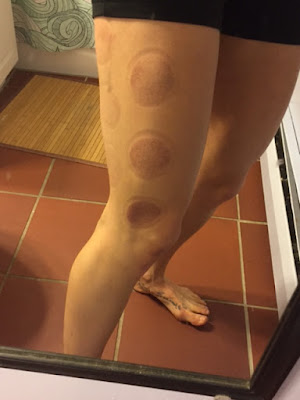 A physician specializing in Physical Medicine & Rehabilitation (PM&R) has been using trigger point dry needling on my wickedly tight glutes, outer hip, quad, and calf. Dry needling is a treatment for myofascial trigger points where fine needles are used to mechanically stimulate the trigger point, creating a local twitch response (LTR) within the muscle fiber. The idea is that the LTR sends a message to the spinal cord to let go of gripping and tightness in a muscle. Although evidence of efficacy in research is modest, this is the intervention to which my perception of relief and responsiveness has been the strongest. It is painful and intimidating at first, but when I feel the muscles twitch and fire there is a strong and real sensation of release. Dr. Bailey has been the most amazingly patient, thoughtful, and holistic physician I've ever worked with. If you're in the Cambridge area and are struggling with myofascial pain or a sports injury, Dr. Bailey may be able to help you too. I wish I had a picture, but I was distracted by my quivering calves and forgot.

Amid my parade in and out of the treatment rooms and medical offices, I've reluctantly decided to acknowledge that my body is asking (yelling) for some change in my approach to endurance training. So I signed up for swimming lessons. 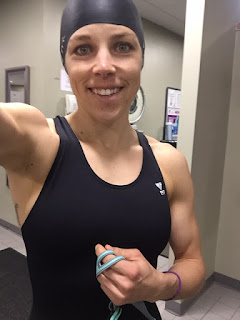 And bought a new grown up bike. It feels fast! 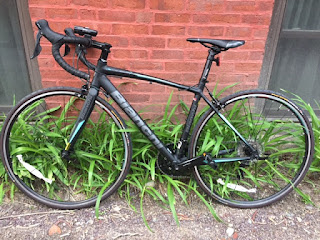 I've had a lot more time to experiment with strength and endurance training mashups. In the early injury stage, I felt so lost without my runner's high that I sought out the highest intensity forms of cardio strength training I could find. This pseudo CrossFit approach to training certainly got my blood pumping and my muscles tired. Lifting heavy stuff while breathless is exhilarating, but I quickly learned that this approach should probably be delivered in modest doses if I want to prevent myself from even further injury and recover between workouts. So I'm balancing out with more traditional resistance training and lots of stabilizing exercises. 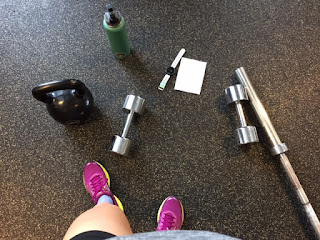 These days, I'm spending more time on prehab and rehab exercises than I am on any sort of competition specific training. It's hours of foam rolling and stretching and stabilization and strengthening and balance and postural alignment and ice and sometimes just plain resting. That's the hardest part. I'm learning to be patient.

I am striving to make peace with my body, not to try to force it or control it or cajole it. I recently listened to Tina Muir's podcast interview with Amelia Boone. Amelia is an obstacle racing phenom, but she also happens to be right around my age and lives a human woman's life with a full time job. She spoke about her experiences facing serious injury.

"It's not about getting back to yourself," she said...
"To try and return to a previous version of yourself is ludicrous, so I tell myself to give myself permission to morph into a new kind of athlete."

The inspiration to write this post came to me on my first 10 mile run since January. It was slow and it wasn't easy. I'm not the same runner I was before, and I give myself permission to morph into a new kind of athlete.