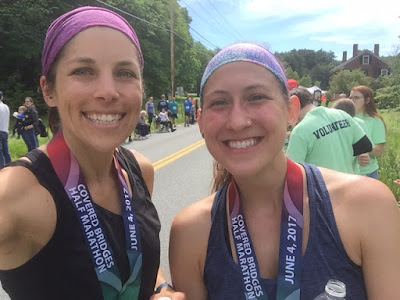 The 26th Annual Covered Bridges Half Marathon in Vermont was as picturesque and community focused as races come. It was a well organized event on a perfect June day.

The Covered Bridges Half Marathon is always held on the first Sunday of June. Registration for 2017 took place online in early December 2016. To maintain the community atmosphere of the event, the race is first-come, first-served and capped at 2,300 runners. As is typical for CBHM, this year's race sold out in under fourteen minutes. I got in because I was waiting for the event to go live with my finger hovering over the trackpad of my laptop.

The event is organized by a completely volunteer staff under the non-profit CBHM, Inc. Each year, the race donates more than $50,000 do local non-profit groups focused on youth activities and youth sports in the Upper Valley of Vermont and New Hampshire.

Lead up to Race Day
At two weeks out from the race, I wasn't certain I'd be capable of running it. Recovery from injury was still very much a work in progress. I had gradually built myself up to an 8 mile long run, then a 10 mile long run. I squirmed in the physical therapist's office as I nervously asked the question I feared the answer to: Can I participate in the race?

Kim said yes. She said yes? She said yes! Well, she did say yes, but with a warning of caution and a list of pre-race and post-race musts including stretching, proper warm up, and a heavy dose of ego check. Absolutely no racing allowed. Walk if necessary. Goal of this race was finishing without risking reinjury.

As race day loomed closer, I compulsively checked the weather forecast. The chilly evening temperatures and threat of storms had me feeling nonplussed about the Quechee State Park campground reservation I'd made. I stared at the pile of camping gear in my living room with my arms crossed.

I kind of hate camping. For years, I've been pretending to like it. Based on my demographic and social background, I totally should like it. The truth is, I don't think it's fun to unpack and repack a grimy, damp tent. I don't like tossing and turning and shivering on the hard floor. I don't like waking up to giant spiders in my hair or reeking of campfire.

In a quick fury, I opened my laptop and booked an AirBNB reservation in Norwich, Vermont in a farmhouse with a proper bed and a shower and flushing toilets and a kitchen. I triumphantly shoved all the camping gear back into the crawl space under the stairs.

The Day Before the Race
I borrowed a car from a friend and whisked Becca away for the two and a half hour drive north. We stopped along the way at a lovely farmer's market and ate soup and salads for lunch at King Arthur Flour in Norwich. 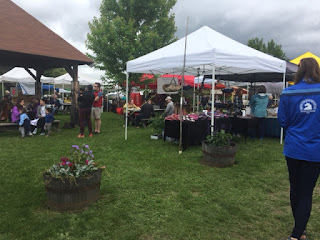 After navigating some backwoods roads, we arrived at the farm and met our hosts. Other guests at the house included several dogs, ducks, a rooster, and a runner named Sue who had completed the Covered Bridges Half Marathon many times. Sue went on to win the women's 55-59 age group in the race with a terrifyingly impressive 1:35:44. #GOALS.

Becca and I were pleased to learn that the farmhouse was sitting on the Appalachian Trail. We set off for a quick loop hike, which grew longer than planned when we took a few "maybe we shoulda brought a map" detours. 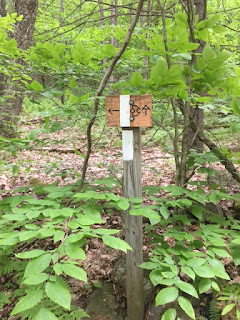 After our hike, we drove over to visit our braver friend Kelsey and her companions at the Quechee State Park campground I'd chickened out of camping at. We enjoyed good company and the fruits of someone else's campfire labor, then retreated to our comfy house when the bugs came out. 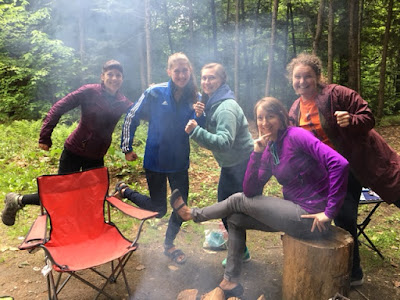 We took long hot showers, baked pizza, and drank five cups of tea. With a microwaved S'more in hand, I crawled into bed to watch the New England Revolution soccer match on my laptop while Becca read a book. We were tucked in by 10 pm. 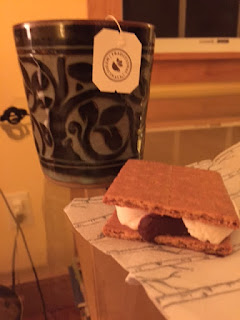 Race Morning
At dawn, our kind hosts had coffee waiting. We ate breakfast, used the bathroom about twenty times each, and set off by car for Quechee Gorge Village. The parking area was ate the village in a big open field. We double checked our gear bags and made one more portapotty stop before joining the line for shuttle buses to Woodstock, where the race would start. We chatted nervously with those waiting with us and saw a barefoot man who is reportedly a running legend at the Covered Bridges Half marathon.

The bus ride took us the thirteen miles to Suicide Six ski area. There was "day of" bib pickup only for this race. For the neurotic runner who likes to go to the expo and get everything set ahead of time, this might be anxiety provoking. But rest assured, these folks have the logistics down to a science. Before I knew it, my bag was checked, bib pinned on, and Becca was applying a temporary Pride Day tattoo to my shoulder. We bumped into some fellow Slumbrew Happy Soles and my friend Kate.

The Course
CBHM is a point-to-point course, running west to east from Woodstock to Quechee. It loops through downtown Woodstock, crosses through a covered bridge, and ambles along the Ottauquechee river to end in Quechee village. The roads are totally closed to cars and a fair amount of the race was on packed dirt roads. Although this race takes place in the mountains, there is an overall net loss of 200 feet in elevation over the 13.1 miles and a gentle downgrade much of the time. There are two notable hills, a very small gradual hill at mile 5 and a short, steep hill at mile 8. It was beautifully scenic and well supported by aid stations every two miles and crowds from the local community.

Race Start
I jogged over to the start line for a quick warm up. It was cool and bright. There were pacers holding signs with expected finish times in five minute increments in the open, self seeded corral. I met a woman wearing a large baby blue pair of children's headphones with a cartoon image of Elsa from the movie "Frozen". I laughed when she explained that she'd forgotten her earbuds and her friend's daughter offered these as a replacement. There was no fanfare or announcement before the race, and the sound of the gun at 8:14 (a minute early!) jolted me forward.

Miles 1-3
I started the race on the fringe of the 1:35 pace group to settle into a steady rhythm. The group was quite large and runners jockeyed for position. Miles 1 and 2 passed uneventfully, but a little on the fast side. I began to worry that I was getting caught up in the nervous energy of the group. I knew it was unwise to get carried away by letting someone else dictate the pace, so I peeled to the side around mile 3 and allowed the pace group to drift. I was feeling rather uneasy and noticed my breathing had grown a little ragged. I had been so focused on the group, I really hadn't looked around me. It felt like forever since I'd run in a race! I jammed my headphones into my ears and took a deep breath. Tom Petty's "American Girl" soothed my nerves.

Miles 4-6
We looped around downtown Woodstock, where there was more crowd support and we were able to pass by other runners on either end of the loop. Just before mile 5, we ran through a covered bridge. I focused on running with control. I had been told there was a hill at mile 5, but it was so gentle I barely noticed it. I was feeling much more at ease and holding my promise not to look at my watch. 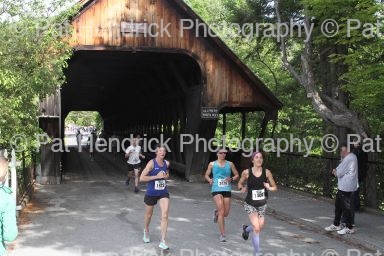 Miles 7-9
After leaving Woodstock, the course followed along the Ottuaquechee River. There was good shade on this part of the course. At mile 8, there was a short, steep hill. Volunteers handed out ice and cheered runners up the hill. I noticed a photographer waiting just after the crest of the hill. I was still trying to get my breathing back under control as I grimaced at him. 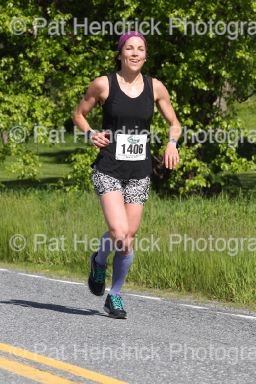 Miles 10-13.1
The backdrop of river and mountains over these miles was wonderful. As we pounded downhill, my hip and IT band began to send me polite reminders of their existence. I listened to what they had to say and slowed my pace. I found the middle of the road, running right down the yellow lines to prevent any lopsidedness from sneaking into my gait as I fatigued. I focused my mind on an even stride and light footfalls, calm and restrained running. The road changed over to packed gravel, which my recovering hip and IT band were grateful for. We reached the village of Quechee and approached the finish in Dewey Field. With about 400 meters to go, my field of vision began to tunnel. Oh boy. I breathed through my nose and reset my shoulders. Smiling and upright, I crossed the finish line and finally looked up at the clock and down at my watch. 1:35:15. Not bad for a restrained "I'm not racing" effort. Although, who am I kidding. I can't run a race and REALLY take it easy. I collected my medal and finisher tee shirt. 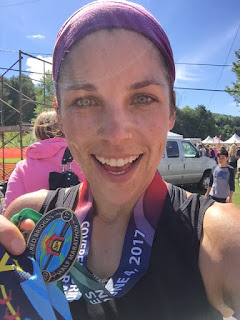 After collecting my wits, I heard my name being called and recognized Kelsey's husband, Luke, who still smelled delightfully of last night's campfire. We walked back along the finish chute to watch for our beloved. Becca came next, strong and graceful as ever. 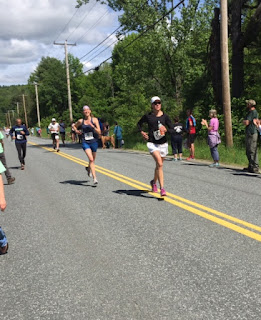 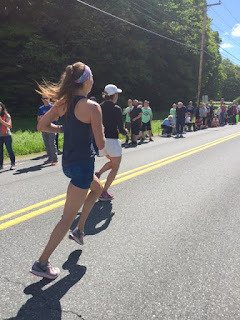 Becca had spent much of the race running alongside a man who was a little older than her parents. She said the miles passed quickly as they shared easy conversation about his life growing up in Canada and his wife, who had run the race with him for many years, but had recently undergone treatment for cancer and was spending this year on the sideline. They stayed together through mile 12, when he insisted that she run ahead for a strong finish.

Ever the obedient patient, I stretched my groaning IT band and hip on the side of the road. 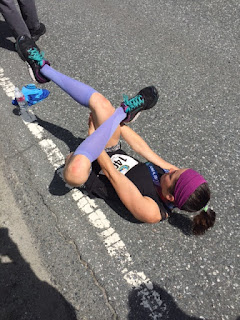 We yelled and cheered as friends crossed the finish line. 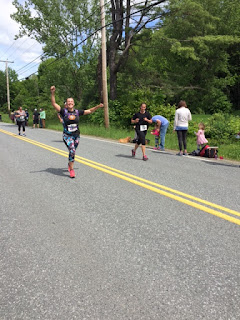 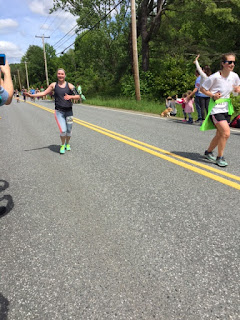 We walked over to the finish line party, which had live music, lots of food, an ice cream truck, and a beer tent sponsored by Harpoon. There were 3 quintessentially Vermont prizes in each age group: handmade pottery, maple syrup, and local cheese. Bag pickup was a cinch, with our bags waiting in alphabetical order on a hillside next to the after party. Friendly EMTs gave me an ice pack for my leg, which was feeling pretty angry. We snapped a photo with our amazing fellow Slumbrew Happy Soles before trotting back to our car. 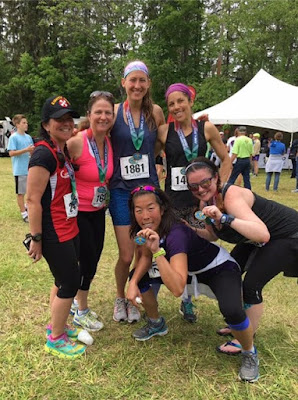 Becca and I crouched next to the car to flash passersby as we changed our clothes. A quick Wet Ones spongebath and a few swigs of a surprise grapefruit seltzer from the bottom of my cooler helped recharge our batteries.

Bottom line: Covered Bridges Half Marathon was impeccably organized with a fast and beautiful course and strong community support. I can see why it sells out so quickly each year! June weather in Vermont can be quite unpredictable, but we really lucked out in 2017. I can't wait to run this race again at full strength!