If you read my last post, you know that I am attempting a return to blogging after a lengthy, unplanned hiatus. As part of my return, I'm pumping out some race recaps from 2017. They're out of date, but I'd like to maintain a narrative record of the events I've participated in. I won't be able to recap all of them, but I'm going to cover as many as I can. Starting with the Falmouth Spring Triathlon from July 2017: 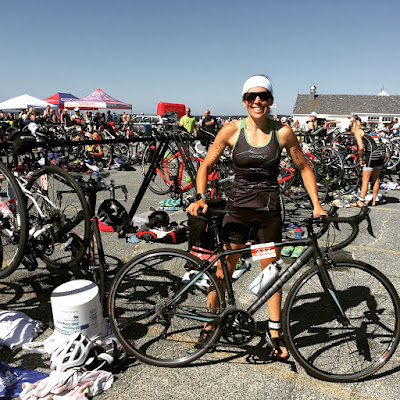 When sciatica and IT band injury sidelined me from running this winter, I turned to biking and swimming. The training shift was partly for rehabilitation and cross-training, but mostly to feed my endorphin addiction.

I signed up for swimming lessons at the YMCA. I bought a swim cap and goggles. I learned to love the meditative state brought on by the repetition of paddling back and forth along the twenty yards of the odd basement pool and the rumble of the Red Line trains passing through Central Square underneath me.


I bought a bike with gears. I took it out for adventures. 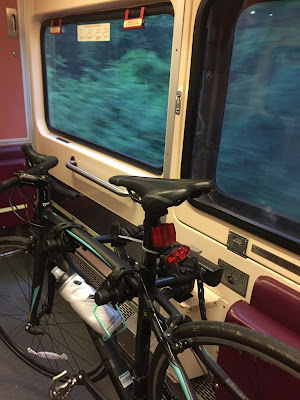 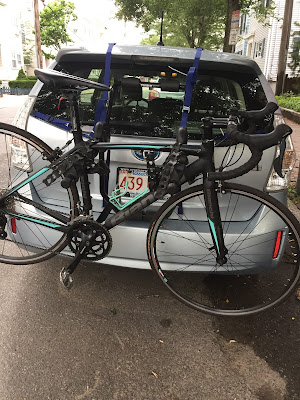 And then, I registered for a triathlon. The Falmouth Sprint Triathlon on Cape Cod, July 16, 2017.

Lead up to Race Day
I didn't follow a triathlon training plan, but I tried to work in 2 swims, 2-3 bike rides, and 3-4 runs each week. I put together a few "brick" workouts with back-to-back swimming and biking or biking and running. I completed one dress rehearsal complete with an open water swim in Lake Champlain. There were so many lake weeds wrapping around my ankles. It went very terribly. 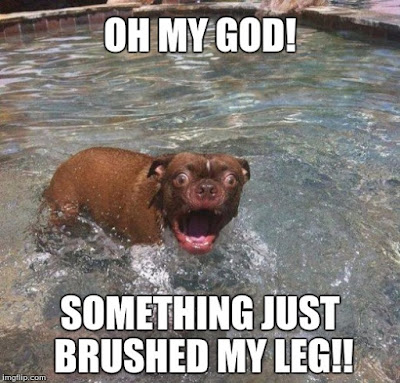 As race day approached I developed increasing anxiety the ocean swim. I imagined myself coughing and sputtering and getting kicked in the face and being dragged out of the water by lifeguards.

I drove to the Cape with Duncan on Saturday morning. After a quick shakeout run to soothe my nerves, I headed to the race hub at Surf Drive beach to pick up my bib and get the lay of the land. I opened my envelope and withdrew a fortuitous bib number. Deja Vu. 3:32:33 was my finishing time for my first marathon, and 3:32:32 had been the time I'd needed to get accepted into the Boston Marathon. 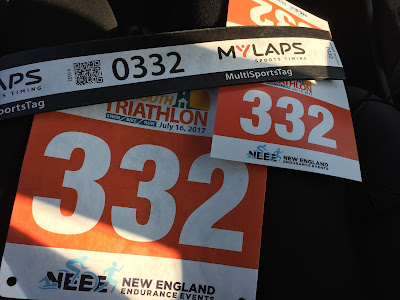 I got home and wrote myself a detailed race day timeline. There is a whole bunch of gear to pack for a triathlon. 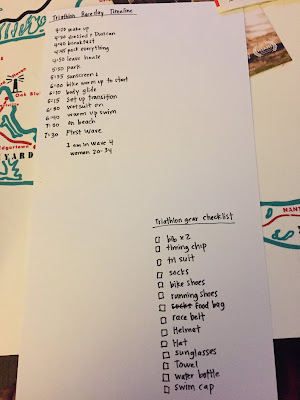 Race Morning
On the morning of the race, I arrived early. Competitors were asked to park about a mile away from the transition area in town lots. I used the bike ride from my car to the transition area to make sure my bike felt just right. I spied on my neighbors and imitated the way they set up their bikes and personal items in the transition area. I felt like an obvious greenhorn. As I laid out my shoes and carefully arranged my helmet and sunglasses on my handlebars, I watched curiously as the man across from me filled a tupperware box with sea water and set it down next to his towel. He explained that this was to wash the sand off his feet when transitioning from the swim to the bike. Well, that sure would've been a good idea. The race organizers marked my arms and calf with my bib number and I was set to go. 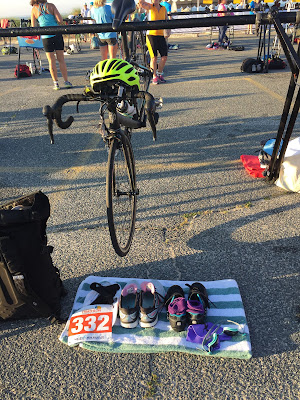 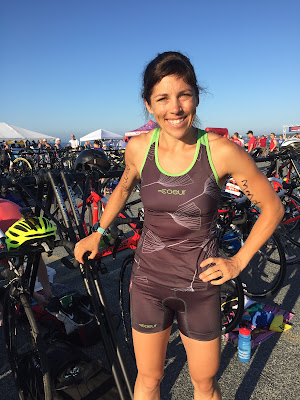 Each athlete was given a colored swim cap to indicate his or her division and swimming wave. I noticed that several of my fit looking neighbors had purple "First Timers" swim caps. I looked down at my own "Female Under 34" swim cap and felt a slight pang of anxiety. As a novice, I had the option of starting with my age group, in the 4th wave of swimmers, or starting with the "First Timers" wave at the very end. I asked a few purple capped folks about how they'd made their decisions, weighed the pros and cons of each option, and opted to swap caps for the "First Timers" division. I could start in Wave 12 or Wave 13. This meant I'd have only other novice triathletes around me and that the lifeguards would be paying closer attention to me, but it also meant I had to wait and watch 11 waves of athletes, each spaced 5 minutes apart, before I could enter the water.

The Swim
I took a quick dip in the water and swam a few strokes to loosen up and get acclimated to the ocean and decided to ditch the wetsuit I'd borrowed from a friend. I was wearing a triathlon suit and the water was above 70 degrees. I'd not practiced swimming in the wetsuit and wagered that the benefits of floatation and warmth were outweighed by the potential discomfort of swimming in an unfamiliar costume and the time sure to be lost by attempting to peel it off my body while running out of the water.

As athletes in the more elite waves set off, I watched attentively from the beach in hopes of gaining some insight about how to approach this daunting swim. I felt somewhat comforted by the fact that most of the swimming was done parallel to the shoreline and that the water was quite calm. Even still, my knees literally knocked together on the beach and I thought to myself, "What the f*ck am I doing here?"

Finally, waves 12 and 13 were called. The race director gave us novices a short speech about how not to panic out there, which mostly just made me feel more panicky. I waded in with the other athletes for the water start and listened to the "Ready. Set." and a long loud BEEP.

Swim, swim, swim. I sloppily thrashed my way forward. I remembered the advice of veteran triathletes and looked up between strokes to sight the buoy. I was on track. In spite of my vision of swimming a steady, classy freestyle, I found myself alternating between strokes so I could just keep moving forward. A little freestyle, a little side stroke, back to freestyle. When I looked around, I felt relieved that many other swimmers had adopted similar sloppy, survival swimming styles. I wasn't panicked, but I found that I didn't care about how I looked or whether I was neat. I just wanted to move forward to the next buoy. The lifeguards yelled out, "everybody okay?" And I was!

I saw the final buoy on my left and made a tight turn in toward the shore. Swim, swim, swim! Suddenly, my fingers grazed sand. I stood up and emerged from the ocean. As I hit the beach, I felt completely elated. I'M NOT DEAD! I HAVEN'T BEEN DISQUALIFIED! It had taken me a pitiful 13:12 to complete the .4 mile swim. I was 415th of 511 competitors. But my body was pumping with adrenaline now.

The Bike
My wobbly legs found their footing underneath me. I sloshed through baby pools which had been placed near the transition area to rinse the sand off my feet. It took a moment for me to find my bike, but once I did, I was all business. Helmet on, buckled. Socks and shoes on. Sunglasses. Sip of water. Let's ride! I ran my bike to the line where a sign read "mount bike here", hopped into the saddle, clipped in my shoes and started to pedal furiously. 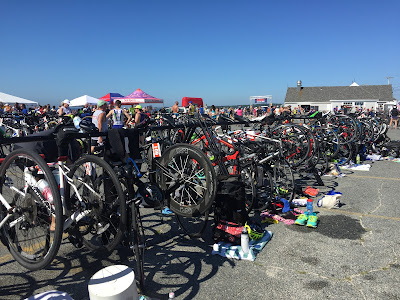 As I rode down shore drive, winding toward the Falmouth lighthouse, it occurred to me that I'd never, ever taken my bike for a ride on closed roads. I was literally able to ride as fast as my legs would take me. With excitement pulsing through my whole body, I began passing cyclists. One, two, three, four, five. We passed the Nobska Point Lighthouse. We hit some rolling hills. With a big grin, I bombed downhill as fast as I could.  Sharp right turn, bike tilt. Shifting gears felt surprisingly natural.

This is actual footage of me riding my bike during the race:


When the beach and transition area came into view, I couldn't believe the bike ride was already ending! As I dismounted my bike, I could only think about how I wanted to keep riding. This was fun! At 205th/511athletes in the ride, I was moving up in the world. I racked my bike, pulled off my cycling shoes and laced up my sneakers. Hat on, bib on. Off we go!

The Run
The run was a 5K out and back on Shore Road along the beach. I liked that there was constant activity. Since we had all started in different swim waves, it was hard to know who I was in direct competition with, so I encountered runners of all paces along the out and back course. Athletes were really supportive, offering high fives and "looking strongs!" as we passed one another. I set a comfortable pace, guessing I must be running somewhere just below 8 minutes per mile. My watch beeped the first mile. 6:40? I felt great. I barreled on, picking off runners ahead of me one by one. I had just run a 5K race in Vermont a week and a half prior to this event and had felt terrible the whole time. I was still feeling cautious about my return from injury, so I had low expectations of my pace in this race. I focused on maintaining a "cruisey" feel, but felt surprisingly awesome. I hit the turnaround. Just needed to run back to the beach now. With 800 meters to go, I started to kick it into gear. The finish was on the sand, and I crossed the line feeling full of joy. My run was 21:08, faster than my 5K race in Vermont the week before and good for 21st/511 athletes. 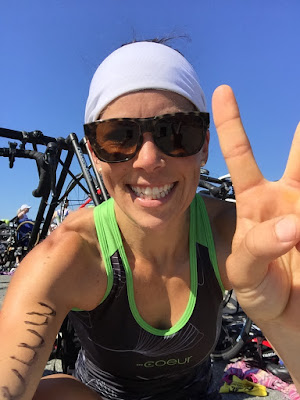 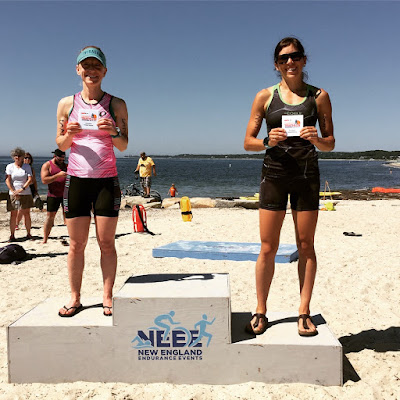 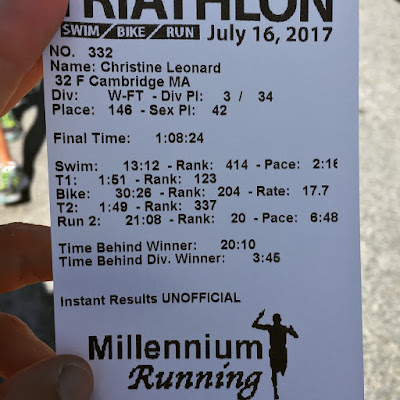 My time was good enough for 3rd of all novice women, an accomplishment for which I was rewarded with a commemorative...bath tile?

Triathlon was such a scary and fun adventure, and the Falmouth Triathlon was well organized, on a great course, and super friendly for a first timer. My first love is still running, but I hope to find a way to get more triathlon in my life in 2018.
Posted by Bean at 11:40 AM