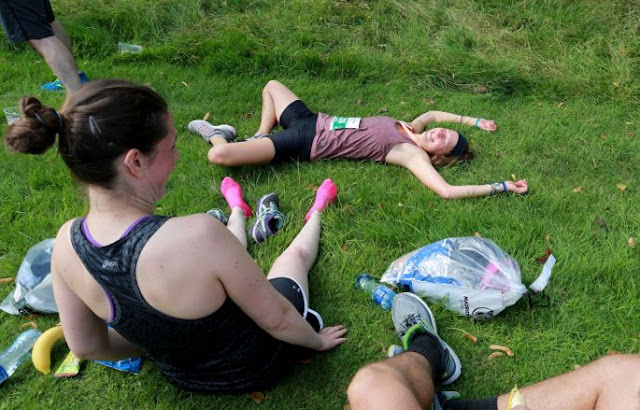 It was a convenient coincidence that the Affidea Rock 'N' Roll Dublin Half Marathon on Sunday, August 13, 2017 happened to be running through the streets of Dublin on the very week of our planned summer vacation to visit dear friends in Ireland. I'd never run in a Rock 'N' Roll event before, but I'd heard there'd be many live bands throughout the course and I loved the idea of "sightrunning" as a quick way to cover a lot of tourist ground in a new city. Signing up with my husband and BRF, Becca, was a no brainer. Without asking her permission, we then registered our Dublin host, Ciara (who happens to be my OG marathon training partner).

Pre Race
We arrived in Dublin the day before the race. We walked to bib pickup on the historic campus of Trinity College, where Ciara was presently studying to teach science. We explored the school's historical campus and retrieved our race packets from the modest health and fitness expo.

Veganism in Ireland was trickier than I'd predicted. They REALLY do love potatoes. Nutrition leading up to the race was not as controlled as I'm accustomed to, but I did get my peanut butter banana fix on race morning.  On the morning of the race, we walked from Ciara's apartment to the start area in The Docklands. The large start area had trucks where we could drop our gear bags to be transported to the finish line. After a few nervous trips to the port-a-potty, I bid farewell to my companions and squeezed into the massive start corral.

The Course
The half marathon is a point to point course on paved city streets and park trail. It starts in the Dublins Docklands and proceeds along the north side of the Liffey River before crossing Memorial Bridge and looping around Christ Church Cathedral. Eventually, the course enters Phoenix Park, which is one of the largest walled city parks in Europe. The course winds around and ends here in the park, where there is a large post race party with music, fake beer, and shuttles to take runners back to downtown. The course had a few long, grinding hills. It was entirely closed to traffic and well marked.

Race Start
According to the race website, more than 14,000 runners registered for the four events held across the weekend. The half marathon and 10K started simultaneously, so runners of both events were mixed together in the starting corrals. Since amazing bands were promised nearly every mile, I opted to forgo using any personal music device.

Miles 1-3
The start was rather crowded, and as we ran over a few bridges along the north bank of the River Liffey, we squeezed ourselves shoulder-to-shoulder. Things opened up a bit once we turned left to cross the river and passed Ha'penny bridge. At mile 2, we made a sudden left turn on a side street, running uphill to Christchurch Cathedral and then cutting back downhill. I think this little diversion was specifically so the course could include the landmark church. I didn't mind it, the little hill gave me a burst of energy early on. We returned to run west on the quays (that's what Dubliners call the roadways along the north and south banks of the River Liffey). We passed the Guinness Storehouse. I was just settling in here, finding some rhythm. 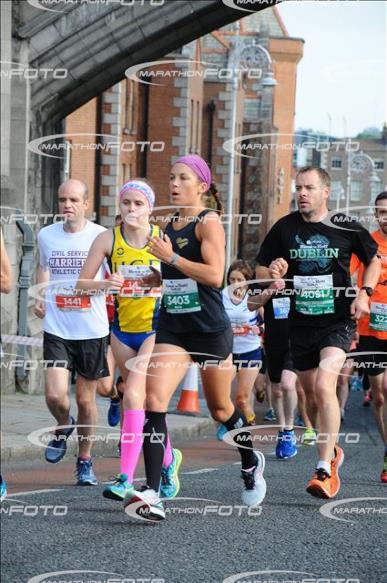 Miles 4-6
We looped through the campus of the Royal Hospital on a gravel path. I liked this part of the race because it reminded me of Fort Adams at Newport Folk Festival and because where my favorite musician was playing folk music one man band style. We ran through a more residential area, where local supporters cheered, "Good on ye!" Somewhere between miles 4 and 5 we ran past a cover band playing some cringeworthy 90s rock. I liked the community neighborhood feel of this part of the race. I settled in, repeating the mantra, "run with discipline." 10K Runners peeled off toward their finish line finish line while we half marathoners we began a slight downhill drag.

Miles 7-9
Just before Mile 8, we turned left into Phoenix Park. As I passed the mile 8 aid station, I began to wonder why running suddenly felt hard. Seemingly out of nowhere, easy running had become a grind. Later, I learned that we'd run up a slight, steady incline for 2 miles here. Woof. The park itself was beautiful, with grassy paths, trees, monuments, and (allegedly) deer. I kept my eyes peeled for the deer, but I didn't see any.

Miles 10-Finish
At mile 10, we bombed downhill. I regained composure and picked a few women ahead of me to target. I knew this was not going to be a particularly fast race time for me after the hilly slowdown, so I focused on a strong finish. As we hit some rolling hills winding through the park, I worked to keep my form in check. Body straight and strong, drive from the hips. Finishers from the 10K race had walked through the park and were joining other spectators here. I was buoyed by a man encouraging, "All the way through, lads!" I tried to muster a strong last 400 meters, but it was a rather feeble effort on this day. 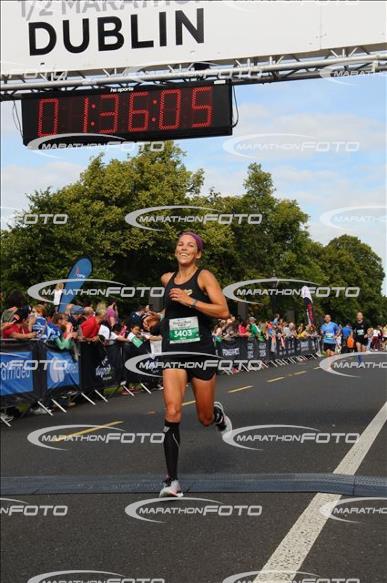 I finished the race in 1:35:35, 516th of 6556 finishers and 58th of 3207 women. According to Rock 'N' Roll's official ranking system, this earns me a "Lead Singer" badge. Which is great and all... I get they're trying to tell me I'm fast. But why the band member class system? Does this mean slower runners get ranked "back up vocals on that one track" or "tambourine" or "groupie"? 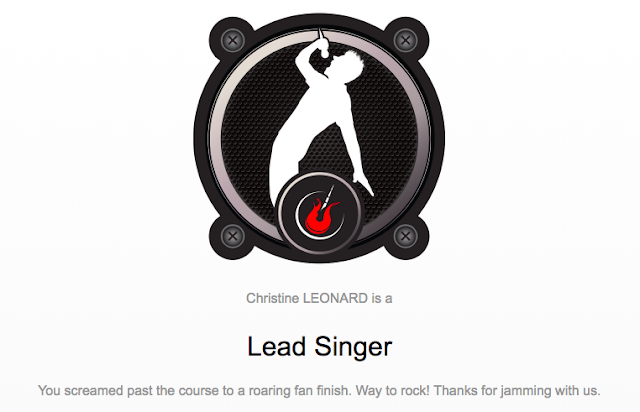 After being funneled through the finisher shoot, I returned to the course to cheer my loved ones into the finish.

Chris had a fantastic race, setting a PR! 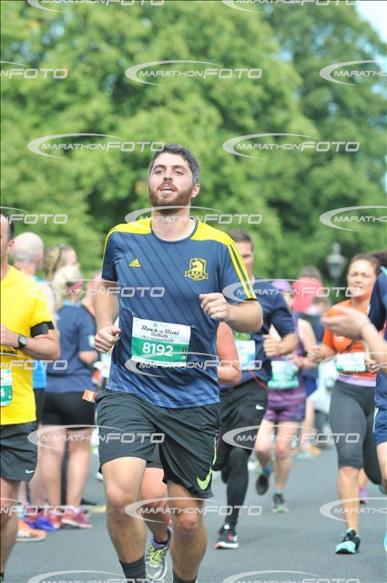 Ciara and Becca, who are far nicer, less selfish humans than I when it comes to running and friendship and supporting each other, finished the race practically arm in arm. 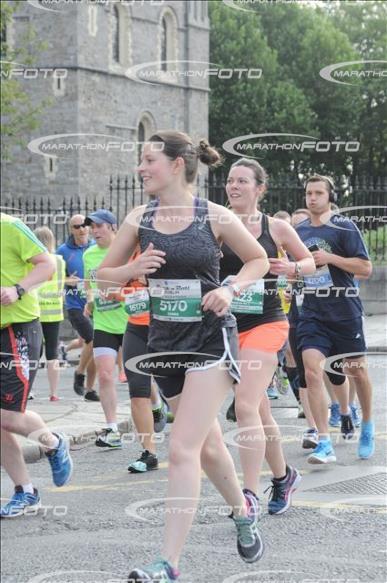 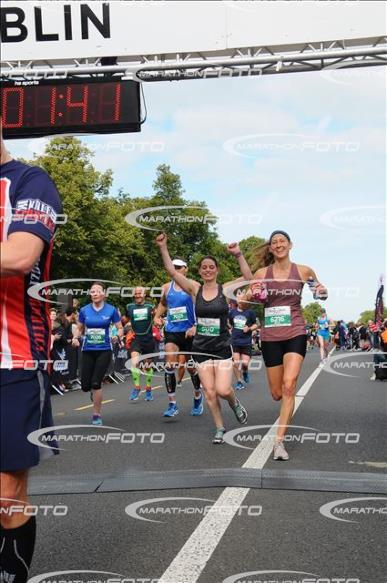 The post race party featured some epic jams by local band The Riptide Movement and one free nonalcoholic beer. We took a tired, happy group photo and boarded the shuttle downtown. 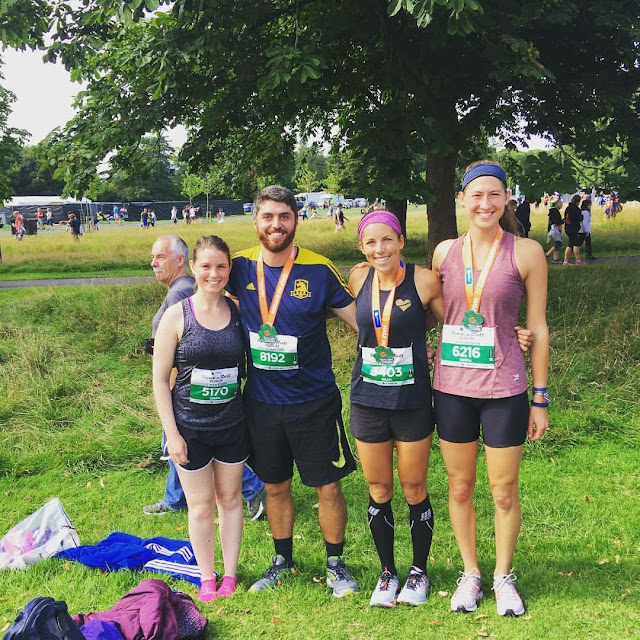 Bottom Line:
Even though I had a hard day on the course, running a half marathon was a truly fun way to see the city of Dublin and the best possible way to spend vacation visiting my running companions. I am all in on racing as sightseeing while traveling. I've even convinced Chris to sign up for a race with me in Portland, Oregon when we travel to the Pacific Northwest this July.